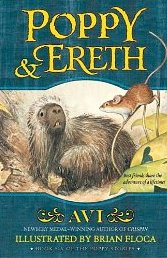 April critique giveaway open through May 1! Scroll down one post.

Poppy and Ereth is the fifth and final MG novel in The Dimwood Forest series by prolific author Avi. The hardcover was published in 2009, but the paperback has only been out a month. One thing I really admire about Avi is his range. Contemporary, historical, animal fantasy--he does them all well.

Eons ago when I first read Watership Down, I realized I enjoy animal fantasy. Upbeat Poppy the mouse and irascible Ereth the porcupine (with a heart of gold, of course) are truly a duo. Though Poppy may be the main main character, Ereth would steal the show if Poppy weren't as well portrayed as she is. My favorite aspect of this book is Ereth's alliterative, humorous expletives. But here's what I really love: How the humor of Ereth's expressions crescendos and climaxes in partnership with the plot tension.  When Ereth was awakened from a deep sleep and muttered, "Growling gingersnaps," it was cute. When he learned the grieving Poppy didn't want to see him and moaned, "Dancing doorknobs," I giggled. When he tried to eat a leafless, dry twig for breakfast and grumbled, "Octopus ink ice cream! It needs salt, too," I laughed. When he despaired over the need for rain and bleated, "Spider snot soup!" I was chortling again. But when he ran to the creek, leaped before he looked, began to drown, and screamed "Barbecued buzzard barf!" my husband had to come see what all the hilarity was about.

Despite all this humor, the book is about grief. Poppy is grieving a loss, and Ereth grieves her withdrawal from him. When she hears his cries and comes to saves him from the creek, Ereth is glad to have her back, only to fear he's lost her for good when a funny mishap makes him think she has died and he's seeing her ghost. Poppy died rescuing him, he believes, and now he's grieving a death, too. Adventures, surprises, and reconciliation abound, along with wonderful illustrations by Brian Floca, especially of Ereth. You may want to start the series at the beginning, but this book can be read on its own. Recommended!
Posted by Marcia at 6:00 AM

We love the Poppy books by Avi. He is one of my favorite authors -- his range is truly amazing. Jane Yolen is tops though ... is there anything she doesn't write?!

I might have to give this a read... thx for all you do.

Yes I definitely want to read these as I love animal stories.

Vijaya -- You're so right about Jane Yolen. Makes me think about whether that much range would be marketable today, with the greater emphasis on branding and blockbusters. Wow, that's a whole other post.

Jeff -- Hope you enjoy it! It's funny and touching.

Bish -- I enjoy discovering a good series after several (or all) of the books are out, so I don't have to wait for them.

wow, this sounds like a really great read! Thanks for the recommmendation!

The books sounds delightful and very human in how it juggles sadness, loss, and humor.
p.s. I can't believe I haven't been following you all this time. Am now!

Lee -- that's a perfect summation: "delightful and very human." It certainly delivers the emotional experience people are looking for in fiction. And thanks for following. You won't believe this, but my word veri is "follo.":)

Avi is always good, and his range is enviable. He seems good at everything he attempts!

Anne -- I agree. Except for Jane Yolen, as Vijaya mentioned, it's hard to think of anyone who's worked in more genres than Avi.