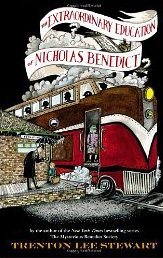 If you've read the three Mysterious Benedict Society books, two of which I posted about here, and here, you won't want to miss this prequel, which portrays Nicholas Benedict as a nine-year-old boy (he's a grown man in the MBS books). And if you haven't read the MBS books, do! (It doesn't matter if you read those books, or this one, first.) In a Dickens-meets-Agatha-Christie sort of way, Stewart gives us the story of an orphan entering yet another new orphanage, except that two things make this situation different: Nicholas is a genius afflicted with narcolepsy, who falls asleep whenever he experiences a strong emotion; and the orphanage was once the Rothschild Mansion and is rumored to contain a treasure. This last might be shrugged off as just a story, except that from his careful observation of the orphanage's director, Mr. Collum, and the man's tapping on walls and thumping on floors, Nicholas realizes that at least one adult on the premises believes the treasure is real. Well, who wouldn't want to get their hands on a treasure? And who better to match wits with Mr. Collum than a boy genius?

The portrayal of Nicholas's genius especially interests me, and when we get inside his mind and follow his observation and reasoning, and when he takes specific action such as figuring out how to make a key mold and then a key on the sly, his intellect is most convincing. I also love that his problem-solving includes clever ruses and acting at times, as well as puzzling things out in the expected mental-exercise sort of way. Other traits, such as his photographic memory and especially his extreme ability to speed-read, seem a little more like plot conveniences. We have to take the author's word for these more. On the whole, Nicholas is likable and believable, and part of the charm of the book is that though several of the characters seem stock (Mr. Collum, the bully group known as the Spiders, Nicholas's friend John), we don't care, because they come alive. In fact, that these are familiar characters coming alive just adds more enjoyment to the book.

Another thing I adore about this book is that it's one to sink down into. It's thick (468 pp.), it's definitely upper-MG reading level even though the MC is only nine, the writing is descriptive and all-around stellar, and Stewart has the confidence to take his time getting the mystery plot rolling -- not something a mystery writer normally does. As far as the reading experience goes, people who like Harry Potter or older-style MG that's a little longer, a little slower-moving, and a little higher reading level than a lot of fare today, will enjoy this. As will readers of smart mysteries such as Blue Balliett's or Elise Broach's books. Highly recommended.
Posted by Marcia at 6:00 AM

I'll have to alert Max ... we loved the other two, so this will be great fun to read. Thank you for spotlighting great reads. I rely so much on reviews like these. Thank you.

I love the MBS books, and I've been itching to read this for a while. Thanks for the thoughtful review!

Last spring I read the first MBS aloud with my kids. So intriguing. And the whole time I wanted to know more about Nicholas, so I'm excited for this one.

Vijaya -- Yes, I love books like these. I want to wave them around and say, "See? See? You CAN sell challenging, thick books for MG and have them do well!"

Faith -- Actually, I'd almost call this one my favorite so far, though I remember how drawn in I was by the first MBS.

Barbara -- Yes, and Nicholas's twin, too!

Mirka -- Haha, if only I could sell my own fiction that fast and neatly. :D

Ooh, I didn't know about this one! Thanks!

I've picked up those books a couple times, but haven't bought them yet. Right now I'm reading THE CAVENDISH HOME FOR BOYS AND GIRLS. I'm not sure if I like it yet...it's in third person.

Another set of books I haven't read! How will I EVER read EVERYthing? :)

I've only read the first MBS, but loved it. Thanks for the rec.

I've read two Blue Balliet's, liked The Wright 3 but thought Chasing Vermeer was ho-hum, otherwise very contrived. I don't think authors should rely on coincidence. Have you read The Calder Game & if so, what did you think?

Great cover and description. I enjoy books of all lengths, and I do adore the ones I can sink into.

Kelly -- You're welcome! I've also found that new titles by even very favorite authors can catch me unaware.

Sharon -- Do you think the third person isn't working?

Bish -- We won't; we will simply drown in an ever deepening sea of delight. :)

Sara -- I'm with you! I preferred The Wright 3 and never really got into Chasing Vermeer -- and I wanted to so badly. I think I got the Calder Game once and got overwhelmed and had to return it to the library. I must try again.

Medeia -- I know, I love the cover too. And I agree with books of all lengths!

My daughter's read the MBS books and loved them - she'll be so excited to hear there's a prequel!

Oh I've read the first one and enjoyed it. Great to know that there's another book coming out.

Susan -- I was, too. Just now, there are a lot of good new books coming out by some of my favorite authors.

Christina -- I'm glad, too. The MBS stories were nicely wrapped up with the third book, so I'm glad he decided to write this one.