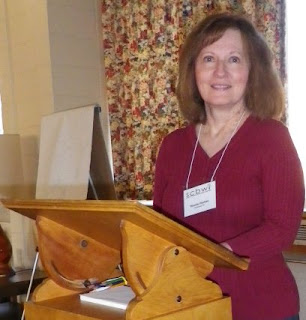 The title of my breakout session was "Idea Explosion Workshop." I obviously can't share it all here, so I will choose a section that addresses a common problem in dealing with book ideas: "I have so many ideas I don't know what to do with them all! How do I choose?" Well, here's the method I recommend.

Look at your list, file, or box of ideas

For some of these categories, you may be choosing more than one idea. That's fine. Throw them all into a literal or virtual pot. Now examine them further.

Which one(s) are overdone topics or genres in today's market? Strongly consider putting these back in the general idea file.

Which of the remaining ideas in the pot have the highest concepts? Take these out of the pot, and put everything else that's in the pot back into the general idea file. Lay these higher-concept ideas side by side on your desk, literally or figuratively, and shine a light on them.

Compare these ideas head to head, two at a time. Let's say you have four ideas on your desk: A, F, P, and Q.
Alas, I wanted to upload a video clip, but I tried multiple times and it didn't work.

Do you have idea tips? Have you been to a conference lately?
Posted by Marcia at 6:00 AM

I confess I have no tips to manage idea explosions. I work on multiple things and when the going gets tough, shiny new ideas are always there to tempt me. And if I don't work on them just a wee bit, they bug me ...

I hope you and I get invited to a conference together :) Why don't you submit a proposal to the Carolinas?

Thank you Marcia. You are a good coach!

Kelly -- I hope you will come to the conference sometime! It would be fun to meet you.

Vijaya -- Y'know, I could take Idea Explosion on the road. Or something else, perhaps. But probably not till you-know-what happens.

Hi Marcia!
Cool advice on the idea explosion front. I truly wish I had that problem more often...
I tried to email you but it keeps bouncing back. Just wanted you to know that my book is OUT! I've included the link below in case you wanted to take a peep at a former student's handiwork!
Happy to be officially following you now that I started my own blog-writingbyhandya.blogspot.com
Cheers!

MP -- Congratulations on your release, and I'm so glad you stopped in! Thanks for the follow. :)Did you try emailing through my website? It should work...

I started PoBoIdMo, I need an idea explosion! I came up with one idea yesterday and actually came up with 3 so far today. No suggestions, just always be aware of everything around you. You never know where an idea will come from.

This sounds like a great method, Marcia. Alas, I don't have that many ideas. Maybe someday. . .

Janet -- I also think one of the exciting things about ideas is that you never know when one will strike!

Ruth -- I don't, either. I've always been kind of amazed by those who say they have so many ideas they won't live long enough to use them all, and that's partly my attraction to this subject. I usually have my present WIP plus one more idea at any one time.

I like this. I think it's a logical way of sorting through ideas. I'll keep it in mind. Thanks!

This method just may help me because I am guilty of being swamped with ideas and not being able to decide which one to work on, and thus... not getting any writing done! GAK!

What a way to go through the idea list. I like it as it makes sure we come up with the best there is.

Sounds like it was a great workshop. I haven't created an idea box yet. The ideas come to me at the right time and I just expand on those. The ones that aren't too hot, come when they aren't needed and don't resonate with me when it comes time to work on a new project. :)

Emily -- That's what I was hoping it would do. Bring some logic into a process that's otherwise pretty subjective.

Nas -- You're welcome, and thanks for visiting. :)

Stina -- I can identify with "The ideas come to me at the right time." That's pretty much how it works for me personally

I love the system for sorting through and editing! Thanks so much for sharing it here. I know you were a smash hit at the conference.

I really want to attend a conference but I have to be patient until we can afford it.
I'm very grateful for writers who go and come back with something to share with those who couldn't attend.
Thank you.

Wonderful blog! I found it while searching on Yahoo News.
Do you have any tips on how to get listed in Yahoo News? I've been trying for a while but I never seem to get there! Cheers

What a great idea! I often do something similar, where I write all my ideas out and then see which interest me most. Then I try to narrow them down by "industry standards" or what's most high concept.

Sometimes, though, the one I really want to work on is something that's not particularly high concept. If that's the case, I try like the dickens to make it pop anyway.

Hello there! Do you know if they make any plugins to safeguard against hackers?

I'm kinda paranoid about losing everything I've worked hard on.

My developer is trying to convince me to move to .

net from PHP. I have always disliked the idea because of the
expenses. But he's tryiong none the less. I've been using WordPress on a number of websites for about a year and am concerned
about switching to another platform. I have heard good
things about blogengine.net. Is there a way I can transfer all my wordpress posts into
it? Any kind of help would be greatly appreciated!

Here is my webpage: overseas

Looking for insurance coverage associated details on the web can be quite easy and helps in several ways such as creating a deserving purchase, to teach your pals, to speak to insurance company with certainty, etc . It is therefore, beneficial. It will help you within getting optimum bang for your buck. pożyczki bez bik Where can you purchase PLPD Auto insurance? Thanks to technology as well as the rise of the internet buying inexpensive PLPD insurance policy has never been much easier. Evaluating prices plus shopping around was once a problem. It involved producing numerous telephone calls and speaking with a fifty percent dozens of product sales repetitions and insurance firms. Obviously you also needed to listen to each sales person place in their particular 2 cents System.Drawing.Bitmap the sales pitch. Thankfully, times have got transformed so you know longer need to do points the old-fashioned way. You can now compare quotes and even buy PLPD car insurance right from the convenience of your own home. If it is your objective to get the least expensive price possible for PLPD insurance I suggest checking the web and going to an online insurance policy assessment site. These sites can make your daily life easy. They are going to request you some easy questions the zip program code as well as the type of automobile a person generate. Once you have provided these details the assessment site will provide you with a listing of the companies in your squat code with all the most affordable prices. When you have simplified down your selection you can complete your own estimate with the provider of the option plus complete your own buy on-line or having a live representative.