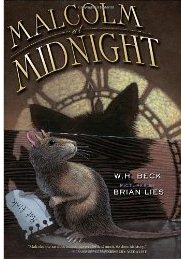 Some of the specific action in Snip's plot I found to be a little farfetched for even a personified animal,  but all in all this is an engrossing story with excellent characters and an inspiring valuation of "valor and merit." Highly recommended -- also keep this book in mind for a younger child who is reading beyond grade level but maybe isn't ready for a lot of human emotional angst or near-YA situations.
Posted by Marcia at 6:00 AM

Sounds wonderful. The plot feels oddly similar to Desperaux ... Regardless, this would be a wonderful read for our family. Thanks for spotlighting this book.

This has been on my list for a while, but as usual your review is the thing that convinces me. It sounds like something my girls would love.

Okay, I'm going to put this on my to read list, because I love animal stories too!

Vijaya -- I'd actually have to go back and reread Desperaux. I think your family will like this.

Bish -- And I thought of you right away!

I've never heard of this one. Sounds very interesting! Thanks for the review, I'll see if our library has it.

I have missed your reviews! This sounds like a great story, in spite of a bad cat protagonist (and I hope that Snip's too-tight collar eventually got snipped!). I like animal stories and also find rats endearing, so this is a book I'll look out for.

Janet -- Hope you enjoy it!

Mary -- So glad to "see" you! I guess I like cats so much that I like even the villainous ones. :)

Great review. I think it would be perfect for my nephew. Thanks for the rec, Marcia!

I don't read too many books with animal characters, but this one sounds charming. Thanks for sharing it.