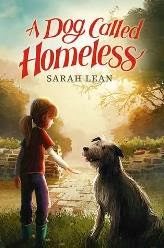 Cally's mother died in a car accident a year ago, and her father and older brother are dealing with their grief by packing away all the reminders and not speaking of their wife/mom. At school, Cally's mouth seems to always be open when it shouldn't be. Her best friend dumps her. When Cally begins to see visions of her mom in a red raincoat, accompanied by a large wolfhound who is not ghostly but real, she speaks up and says so. Dad gets angry and tells her he doesn't want to hear it; her aunt, more gently, tells her she's mistaken. Furthermore, Dad is putting their house on the market and moving the family to an apartment, and no amount of "please don't do this" makes any difference.

Then, at school, comes a charity fundraiser that involves volunteering to remain silent for 24 hours. When her ex-friend and other classmates jeer that Cally couldn't possibly keep her mouth shut, she volunteers. She completes the challenge with ease, and then, when the principal announces that the volunteers may speak again -- Callie doesn't. She realizes that she sees no reason. No one listens to her, anyway.

In the new apartment, Callie makes friends with a boy in the other flat who is blind, nearly deaf, and may have cerebral palsy or a similar condition. Though she doesn't speak, and in any event can speak to Sam only by spelling into his hand, the two grow into close companions. What the story seems to be saying here is that it's willing, listening hearts that really forge communication, not merely, or necessarily, the ability to speak.

Cally continues to see her mother's ghostly image, and the very real dog, which, while connected to her mother, is also being looked after by a homeless man, Jed. While everyone around Cally's family comes to believe that the dog belongs with them, to the point of telling her father so, he angrily insists they cannot take care of a dog.

We know that in the end they will, and that Cally will speak again, too. It's the emotional journey that's prominent here. I found myself rooting for Cally to not speak again until she was good and ready, and in that way this book tapped into powerful childhood emotions for me -- always a sign that I'll find that book a winner. Lovely and heartwarming. Recommended for anyone who would like a realistic story with overtones of magical realism.
Posted by Marcia at 6:00 AM

I will look for this book ... goodness, I still feel like Cally at times :)

The cover image has echoes of Because of Winn-Dixie, but your description gives us more of a distinction to not confuse the two. I always appreciate your reviews.

I was thinking BofWD too until I kept reading. What a unique premise! I've also always been intrigued by stories where the mc doesn't speak.

I adored this one. So much so that a hardcover now lives in my bookcase. The touch of magical realism was so well done. And the characters so thoughtfully fleshed out.

Mirka -- I hadn't thought of that. You're right. And thanks!

Leandra -- Since she can, but chooses not to, I'm always intrigued by that kind of willpower. I guess the trauma has to be strong enough.

Barbara -- Those are the books I buy in hardcover, too -- the ones I'm going to love forever.

This sounds like a beautiful book. Just hearing you tell about it has me rooting for her not to speak yet either. Thanks for sharing your thoughts!

The cover is beautiful and it sounds like the story is too.

Oooo, I love a book with magic and realism working together.

Janet -- I love books that bring out the child in me. :D

Kelly -- It is beautiful. Especially the friendship with the boy.

Bish -- I'm a fan of magical realism too.

Wow, this really sounds intriguing. I think I would like to read this one.