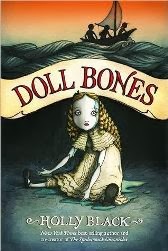 I have to admit, when I first heard this was a book about a doll made out of the bones of a murdered girl, I wasn't interested. I believe I shuddered, actually. But curiosity, the fact that this is done for a MG audience, and Newbery buzz combined to make me pick it up. And I'm glad I did.

Zach, Poppy, and Alice have been friends forever, and even though they are now twelve, they continue to role-play with action figures to the point that their fantasy storyline has gotten very elaborate and absorbing. They are not just misfit kids who have no other friends, though. Zach, the POV character, is also an up-and-coming basketball player, growing up into a handsome kid (though he doesn't see this himself), and loves the sense of belonging he gets from his teammates. Zach's dad, who is suffering hurts of his own, decides that the time has come for Zach to put away childish things, and since Zach isn't inclined, he'll do it for him: He throws out all Zach's action figures. Zach, angry, embarrassed, and suspecting maybe he should be ashamed, refuses to tell the girls what happened. Instead, he turns his anger on them and tells them he can't play anymore. That's it. The end. Finis. It's when Poppy gets The Queen -- her mother's antique doll made of bone china -- out of its glass case in a dramatic attempt to get Zach to change his mind that ghostly things begin to happen. In short, the doll convinces the kids, particularly the loud and dramatic Poppy, that she is the bones and ash of a murdered girl, and unless they take her to her grave, where the rest of her remains are buried, she will make their lives miserable.

From there, they go on a road trip in an effort to accomplish the quest. I'm not going to detail the plot much more, to avoid spoilers, but this book is at heart a friendship story. Where the novel really shines is in its delineation of the relationships between all three kids and how each one is changing and fears change in the others. The adventurous plot is a wonderful vehicle for this exploration, and there are some great quotes such as the one by Zach's dad when they reconcile: "I thought you needed to be tougher. But I've been thinking that protecting somebody by hurting them before someone else gets the chance isn't the kind of protecting that anybody wants." I'm also fascinated by the history of bone china, which is touched on and may or may not have been the impetus for this story.

I had a couple of minor quibbles with the book. It absolutely turns on the fact that Zach wouldn't explain to his friends why he wouldn't play the game anymore, and I wasn't fully convinced he would keep that secret for as long as he did. And, for me, the quest portion bogged down a bit until it suddenly got irresistibly exciting. In fact, I came this close to putting the book down, but I'm really glad I didn't. A very good novel, worthy of its Newbery Honor.
Posted by Marcia at 6:00 AM

I didn't pick this up for the same reasons as you, but I'm rethinking that now, so thank you for your honest assessment.

This has been on my TBR list. And I love Holly's other MG series, The Spiderwick Chronicles. I wish they'd make more movies out of that series. =(

An unusual premise and good story telling- that's the sense I get of Doll Bones from your review. Very good, as all your reviews are.

I had the EXACT feelings about this book. It was really, really good--but those two things... Still, I think it deserved its Newbery Honor, and I enjoyed it immensely!

Okay, you've convinced me to pick up the book :)

Leandra -- Maybe I should give Spiderwick another try. It didn't grab me at the time.

Mirka -- Yes to both points: unusual premise and good storytelling.

Vijaya -- Let me know what you think.

I'm so looking forward to this book. I tried to order from B & N the other day but they were out-of-stock. Thanks for the review! Now I'm even more anxious!

I have to admit, I didn't read all of your post because this is on my TBR list!

I will come back and read your thoughts once I finish it!

Ron -- I try not to issue spoilers, but I know what you mean. Hope you enjoy it!

Didn't know about this book. I do love Holly's other MG books though.

I'd never heard of this book, either. Sounds like a very unusual book. To be honest, I'm not sure if I would like it. Thanks for the good review.

Kelly -- This was actually the first book by Holly Black that I read, and I picked it up partly to rectify that.

Janet -- It's not an easy book to describe in a one-liner, that's for sure.

I felt the same way about this one when I heard about it, but after your review, I think I'll give it a try. Thanks, Marcia.

I have this and look forward to reading it.