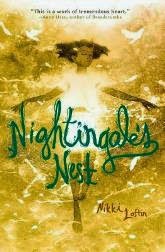 Twelve-year-old Little John feels responsible for his younger sister's death. They'd been climbing trees one day, and he jumped down, so she did too -- and was killed. Now, his depressed mother is losing her hold on reality, sometimes thinking her daughter is still alive. His father drinks too much. Money is so scarce that all luxuries (gaming system, cable TV) have been sold or dropped, and even making the rent is in question. Dad owns a tree removal service, and this summer LJ must work for him so that they can tackle a large job for the Emperor, so called because he is the rich owner of a string of dollar stores. LJ is only too happy to do so, because he feels that "every last murderous tree" in the world should be cut down. The first day on the job, though, he meets another little girl, about his sister's age at the time she died, who wants nothing more than to live in a tree and seems strangely able to do just that.

The book's first sentence sums up the story to a great degree: "When I first heard Gayle, I couldn't tell if she was a bird or a girl." Indeed, in this tale of magical realism, we are never sure. Her hair is soft as down, she "perches" and "hops like a wren," she's so light that possibly her bones are hollow. But the central story is Little John's, as he tries to dig himself out of a mountain of regret only to compound it. And when he faces a choice between betraying Gayle (as he, in a sense, betrayed his sister) or helping what's left of his family survive, he's facing a truly wrenching dilemma.

Based on Hans Christian Anderson's "The Nightingale," this is an emotionally affecting book with gorgeous writing, complex characters, a strong theme of forgiveness, and more richness than I can convey here. I would not be at all surprised if this novel becomes an award contender. While some readers may struggle with the sadness in the book, I never found it overwhelmingly gloomy, and it is balanced by the magic, and the ending. Highly recommended.
Posted by Marcia at 6:00 AM

I started this last night, so I confess, I didn't read your post thoroughly because I don't like knowing too much about books before reading them myself. Looking forward to what I've heard is a fabulous book.

I hadn't heard of this book. It does sound interesting.

I've been looking forward to reading this! Thanks for spotlighting it.

Barbara -- Hope you love it.

Best reviewer award to Marcia. You are a lady of taste.

I've it down to buy. Guess I'd better get busy and actually do that.

First lines always catch my attention, good and bad. This one is simple and lovely. I LOVE that cover, too!

Dawn -- I never paid that much attention to first lines till we started being told we should because nobody has an attention span anymore. It IS a good idea, though, and I think this is a fine example of a good one.

I love the cover, and the book sounds really good!

I'm a sucker for beautiful writing. Thanks for the review!

Kelly -- Cover and story are both good.

I've not heard of this one. Sounds very interesting.

Sounds similar in plot to a YA book I read this week - The Summer of Letting Go, by Gae Polisner. I loved it and will be reading this one as well. Thanks for the spotlight, Marcia.

Janet -- I wonder how many books I'd love that I've never found.

Ruth -- Hmm, I should check out that book, too.