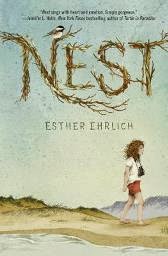 Naomi, eleven years old in 1972, loves birds so much that she's called "Chirp" by everyone who knows her. She shares a love of dancing with her mother, while her older sister, Rachel, relates better to their psychiatrist father's penchant for counseling, which he does even within their family, often with gently humorous results. At least, at first.

Early on, Chirp's mom is diagnosed with MS. She can't dance anymore, and with this loss her mental health declines even faster than her bodily health, to the point where she is eventually hospitalized for depression. At this point, I must say that my involvement in the book lay more with the mother than the MC. Because I imagined losing writing the way the mother lost dancing, and even though I know I could not make writing my identity the way the mother made dancing hers, it would still be hard at times not to do exactly that. On top of this, having a therapist husband didn't spare the mother at all, or even really help her any.

As Chirp goes through the absence of her mother, the acting out of her sister, and the misunderstanding of her well-meaning father who doesn't really get her, she becomes friends with Joey, a somewhat sketchy neighbor boy who in the opening scene is throwing rocks at poles. Joey has problems of his own at home, and the personal pain each one carries makes their friendship fragile, in part because Joey understands Chirp's situation from the start whereas she's mainly blind to his. The 1970s details were a pleasant trip back in time for me, but also a jolting reminder that back then issues such as child abuse and mental illness were both swept under the rug and less gently treated. One example of this is the matter-of-fact way that Chirp refers to her mother's place of confinement as the nuthouse.

This is a beautiful book, well written and with affecting emotions. While I don't really want to issue spoilers, I feel some obligation to point out that the book gets a lot harder, sadder, and darker before the story's through, and it could be a bit too much for a very sensitive middle-grader. Other than that, though, this is highly recommended.
Posted by Marcia at 6:00 AM

I'm intrigued. I gravitate toward books that deal with mental health issues. And I think I'd enjoy the 70's content as well.

Dark and sad... I think so many adults read MG now that it may be one of the "books for all ages" stories.

Sounds interesting. I like the 70s, too, my favorite decade. Though, I don't tend to gravitate toward sad and dark books.

Mirka -- A lot of the Goodreads reviews have commented on that, that it appeals beyond MG, or that they identified with the mother.

Janet -- I like historicals from decades I can remember. :)

Thanks for sharing your thoughts. I haven't read this one.

This was 3.5 stars for me. I wanted to love it, but didn't. I'd like to read more from the author, though.

Times have certainly changed! You are absolutely correct--that time was not infused with political correctness. An interesting era to deal with mental health issues. I wish Esther great success with her book!

Kim -- And so little hope for a lot of physical diseases, too.

You've got me interested. I love a story that explores the sad parts as well as the happy ones.

This one is on my list ... waiting for it to arrive at the library. That's fine, because my reading pile is pretty huge already.

Lee -- Yes, both. Books that can make you cry and laugh are wonderful.

Vijaya -- My pile is actually way down lately. Too much to do. I'm sure it won't be long before the pile is up there again.

Sounds interesting. I'll add it to my list. Thanks!