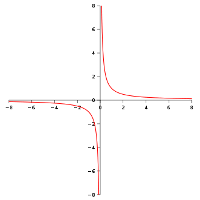 Time for some more nifty rhetorical devices, alias wordplay, today. Hypberbole (not to be confused with the above, which is a hyperbola [y=1/x, to be precise], which is math [I did say there'd be math in this blog]) is exaggeration meant to create a vivid, funny or memorable effect: I gained five hundred pounds over Christmas. There are more crowns on my molars than on the crowned heads of Europe. The words in my mouth have more flavor than these powdered mashed potatoes.
**Quizzy Time: Guess which one of the above is mostly true of me? Guess which one is just a smidgen true?

The opposite of hyperbole is understatement, which isn't exaggeration in the sense of making something bigger than it is, but we could argue that you can exaggerate smallness too, yes? For that we have a cool technique called litotes (LYE-teh-teez), an indirect statement that dampens the impact of something by negating its opposite or making light of the truth. He's not too swift. Wrapping your car around that tree didn't do much for the front end. And perhaps my all-time favorite, which I heard at work years ago, She's just a little pregnant around the edges.

(ah-PAHF-ah-sis) is understatement that states something by stating it will not be stated. These are all your "needless to say," "I don't need to tell you" and "as you undoubtedly know" remarks. Like all understatement, it's meant to get a point across in a delicate, persuasive, wryly humorous, or inoffensive manner, giving directions yet expressing your confidence that the person already knows as much. Then again, apophasis can signal an antagonist that your words have teeth while still remaining pleasant: For the moment we'll overlook any rumors that you blew the entire month's payroll at the casino.

Well, I'd better go make supper before everybody starves to death. Such an event wouldn't exactly make our families' weekend. Needless to say, I'll expect some comments on this post. :)

Thanks for not exaggerating the effectiveness of using hyperbole and for not downplaying the impact of using the litotes.

You make learning about literary devices fun, but I didn't have to tell you that. ;)

What fun words. And I love that you gave such great examples, especially on Apophasis!

Candace -- LOL! And thanks.

PJ -- Aren't they fun words? I just love them. I don't really have many of them committed to memory, though. I look them up when I need them.

Can I surmise that a man said, "...around the edges?" That is too funny... but always, I appreciate the laugh.

Oh, good examples. I like understated books the best ... where I can fill in the blanks.
And sometimes it's powerful.

GWG -- LOL. Actually, it was a woman who said it. She was trying to delicately but wryly refer to a teen who had just gotten the dismaying news.

Vijaya -- I like understatement too, especially when it comes to emotions. Understated will make me teary-eyed (or whatever the emotion being evoked) whereas overstated sounds suspiciously like an attempt to convince.

Litotes -- I love that one - think that would qualify as an onomatopoeia? Sounds like one. (Also reminds me of the way a lot of the teens I know speak...)

Anne -- I thought that same thing while looking at some of these terms. They are almost a technique in themselves -- onomatopoeia. Definitely litotes, because it sounds like "lightities."

Good post. (I'm guessing it's the mashed potatoes lacking flavor -- am I right?)

I started reading this feeling smug: I know about hyperbole and even apophasis, including how to pronounce them, but in between them I found that 'litotes' is pronounced LYE-teh-teez, which I did not know. I'll be walking around now, whispering 'Light at ease'.

Oooooh, Mary, you're the first to take my quizzy seriously! I was wondering if anybody'd bite. And you're right -- the words in my mouth have more flavor, due to a condition (not sure that's the right word) that itelf has a really nifty name: synesthesia. The one that's a smidgen true is the molar one, since I broke a tooth on some chewy toffee. Fortunately, the 500 pounds one is fiction.

I'm more familiar with the techniques being described than I am with the names for them. But I love the words, and I'm kind of fascinated by the whole "names for things you didn't know had names" idea. I think for a lot of people these terms fit that category.

I love this post. And if I were to have guessed before Mary did, I would have said your words too. I think I'd fall in the crowns category. :)

Thanks, Rena. And good going on the quiz. :) My dental condition is really quite good, so I was very surprised to bite into that Christmas delicacy and feel about 1/4 of a molar pull away. Odd sensation. Although I think it was mostly filling that came out.