After Iris, by Natasha Farrant 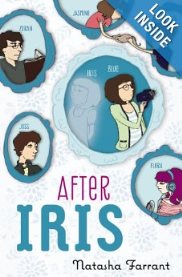 Blue (Bluebell) Gadsby's twin, Iris, died three years ago, at age nine, and the lives of this entire British family have never quite recovered. The oldest, Flora, dyes her hair weird colors and takes up with the boy next door; the two younger ones, Twig and Jasmine, are all about their pet rats. Both parents have dived headfirst into their careers and are never home -- literally. Dad is living 100 miles away and from all appearances seems to be getting ready to make it permanent. Mom jets to major cities the world over, working as a bigwig for a cosmetics company. Their place is taken by a young man named Zoran, a Bosnian piano prodigy turned au pair, who tries mightily to cope.

The emotions drive this book, so it seems quiet at times, but we know the characters are moving toward a place where they must either recover or crash and burn. Blue handles life by viewing it through a video camera, and the moment she finally explains why is one of my favorites in the book:  "Outside the camera, there are no limits...more cities and prairies and mountains and cars, and they're all places and people you don't know but which exist anyway. Inside the camera, the world is limited to what you can see through the viewfinder. If you don't like it, you can change it. Or, with the flick of a button, you can switch it off. You just say goodbye, world. Time to go. Like dying, but not quite so final." Though Blue feels she is the only one of her family who properly remembers Iris, she gradually learns that her younger siblings are grief-stricken at remembering so little, and that Flora has been trying to escape and find little happinesses wherever she can precisely because she remembers so very keenly. The same is true of the parents, which fortunately creates some sympathy for them. Really, I spent most of the book wanting to give them a good swift kick, for they truly are neglectful. I cheered when Zoran, the odd caretaker with whom the kids get off to a bumpy start but later come to love, stands up for himself and tells the adults that with all due respect, he is not the parent.

The anniversary of Iris's death is Christmas Eve, and as December approaches, it appears Christmas will be a complete washout this year. One morning, Blue wakes up and the younger two are gone; after a frantic search in two feet of new snow it becomes apparent that Twig and Jas have set off on a train to go get Father and bring him home. In chaotic and improbable fashion, the entire family arrives home for Christmas, and though everything isn't tied up in a perfect bow, we are given to understand that the family will live together from now on. As I said, there were plenty of times I wanted to shake both parents, and I didn't find Mum's sudden declaration that she was going to quit her job completely convincing. But the ending is warm and satisfying without being over-emotional. This book takes a not-all-that-original premise and plot and proves once again that the characters and the writing can win the day. Recommended.
Posted by Marcia at 6:00 AM

I read MY SISTER LIVES ON THE MANTLEPIECE which is very similar in idea -- a twin dies, leaving the family in shambles. Like AFTER IRIS, they are also a British family. It was a powerful story whose voice sold it for me and is told by the little brother.

Sounds interesting. It's funny how the category of middle grade can include so many different themes and also, different moods. Some can be very dark, while others are more in the middle. Yet some are really bright. Good to have all this distinction in MG books!

Grief is always an interesting topic to explore. It always surprises me when parents check out so completely (and I've seen it happen in real life)... but it is the coming back that is the story.

As an aside, even pets grieve ... but we can learn a thing or two from dogs and cats.

Barbara -- I love realizing over and over again that the power is in the emotion and the voice. Ha, but give me that, and then I say, "I gotta have plot." :)

Ron -- You've hit on my absolutely favorite aspect of MG. It is SO inclusive of different types of books.

Vijaya -- I do get one aspect of the checking out: Each kid is unique, and no matter how many others we have, *that one* is gone, and there's nothing harder to bear. But the children do not feel that in the same way, and, even as adults, are prone to say, "What about the rest of us?" So much depends on the emotional health of the parent as a person.

What a gorgeous review, Marcia.Sold.

Just that short quote you included makes me want to read this.

I'd probably cry a lot reading this. I'm such a baby.

Kelly -- The author would be thrilled. :)

I'm not up for a book full of grieving right now, but this is a great review and I'll probably keep the title in mind for another time. Thanks.

This book is calling out to me. Thanks for sharing it.

Ruth -- Isn't it wonderful that there are books for whatever stage we're in?

Medeia -- I love that it's calling out to you!