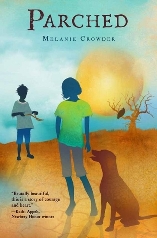 Oh, my goodness, this book is all about the writing. Beautiful, poetic, spare, and evocative, it achieves its effect with strong verbs, concrete nouns, and abundant sensory detail. I can seldom read a book just for the writing; I need a story. But in Melanie Crowder's Parched, you can linger over so many sentences just for the sake of lingering. "A drop of sweat slid down the ridges of his bare spine." Can't you just feel that? "The city streets were clogged with rusted-out cars stripped of their tires and tilting at odd angles." Can't you just see that? In this book, you savor the words the way the characters savor a single drop of water.

And there is a story. This upper-MG literary novel is told from three POVs --a boy, a girl, and a dog -- and takes place in a land that might be Africa, might be the US, might be now, might be future. The setting is specifically drawn yet unnamed, and I find that so suited to the subject matter. Because this is a book about a land without fresh water, and to that problem no land is immune. Sarel is the girl who witnesses her parents' murder because her family had a hidden well. Musa is the boy with a gift for dowsing, who has escaped the gang that kidnapped him. Nandi is Sarel's dog, whose narrative opens and closes the book, and that dog's voice had me in four short sentences. These three must find water or die trying. And the relentless thirst, the feel of their throats, the caked dirt they have no hope of washing off, makes you feel like you're there with them.

At times, the book is almost too grim to bear (the fact that it's short helps). For that reason, I think upper MG definitely fits, although I don't consider it YA (as some have called it, and as my public library system has labeled it), and very sensitive kids might be better off waiting a while. For most anyone else, I would recommend picking up this stunning book and giving it a try.
Posted by Marcia at 6:00 AM

Sounds like a powerful book. I'll have to check it out sometime.

So true, parts of this book are grim. Even as an adult I could only read short sections because it overwhelmed me. But it's a story so worth the reading.

Good MG can be for all ages, I feel. Parched seems to be just such a book.

Christy -- Powerful, it is!

Barbara -- I'm sure this is a book that some adults would doubt is for children. And like you, I had to put it down at times. But I couldn't possibly have quit.

Mirka -- That's one of my favorite things about MG. Likeliest of the age groups to be able to carry that "all ages" flavor.

Vijaya -- Actually, I'm not a huge crier when it comes to books. Shoot, maybe it's an occupational hazard, like being able to predict the plot. But this book is hugely affecting, yes.

Wow, that sounds amazing. My pile is already towering--but I know I'll have to add this!

You always pick great books to review. Content and cover-wise. Hats off to you, lady. =)

I did this for MMGM. It is grim. I'm glad I won it in a blog contest.

Faith -- I know, my pile is towering, too. One of the cats knocked it down two nights in a row.

Leandra -- Thanks! We must have similar taste. :)

Medeia -- Yes, I remember reading your post. I wouldn't mind at all returning to it for the language, so it's great that you won it.

Great writing. I love those lines you quoted from the book.

Does the dog actually talk or just narrate? This seems like such a different kind of read. It's great to find those.

Janet -- Me too, and there are so many more.

Kelly -- It's third person close narration from the dog's POV.

Sounds like an amazing story! Thanks for sharing about it,

I am not dying of thirst just hearing your description of the book. Sounds like a must read!

I was immediately struck by the poetry of this story, and how well it works to balance the harsh realities of this world that exists for the three characters.