In Which I Go Outside

Last week, a friend and I took a day and visited some points on the Niagara Escarpment, which runs through portions of Wisconsin. These photos were taken in the general area of Green Bay, which is half an hour north of us. (Yes, we have more than football and cheese!) They are her photos, since my camera mysteriously stopped working after about three shots but then was fine after I got home. She's by far the better photographer, so I could joke that I just wanted *her* pictures -- except my camera really did get wonky, and she'd've sent me the photos anyway. The fall colors are really just beginning, and the waterfall wasn't more than a trickle, but there was enough rain this year that it wasn't dry, and we could still hear it. The cliffs and rock layers are something to marvel at.

Have you been able to get outside this fall? 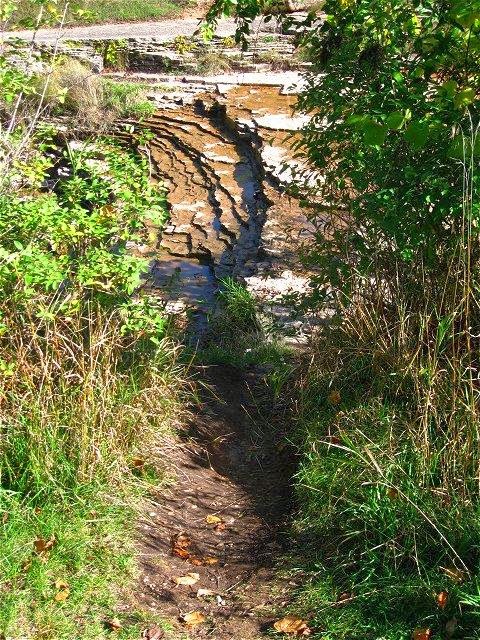 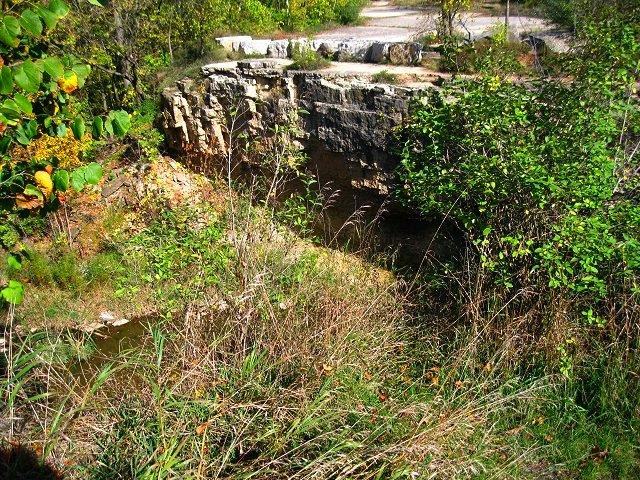 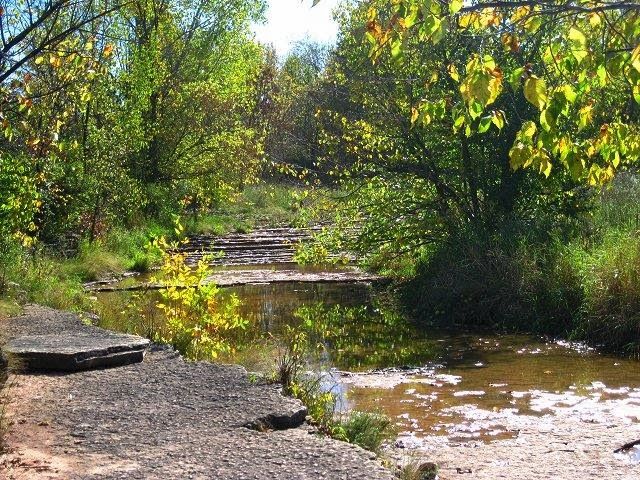 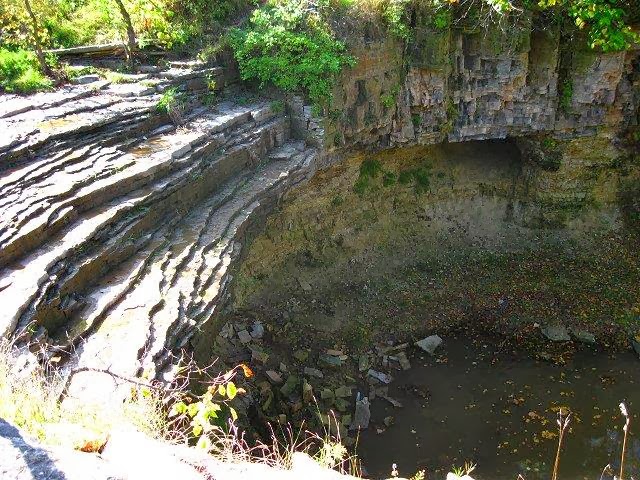 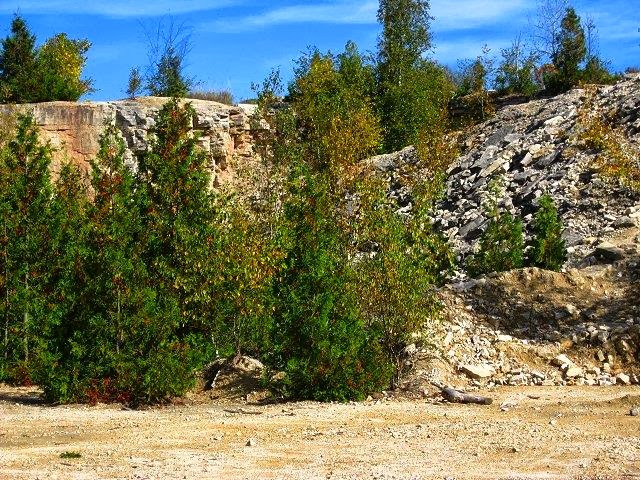 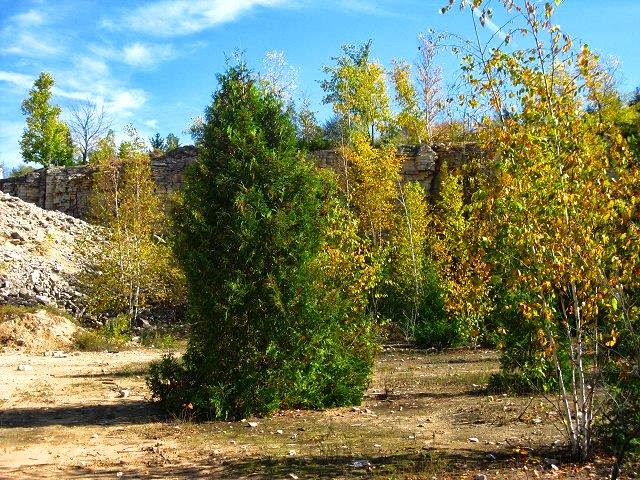 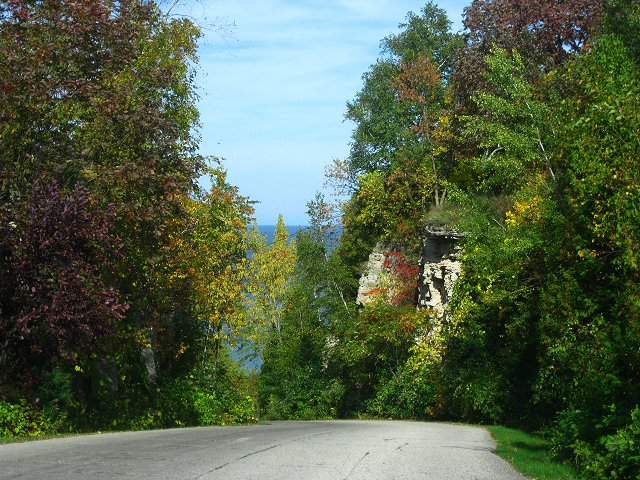 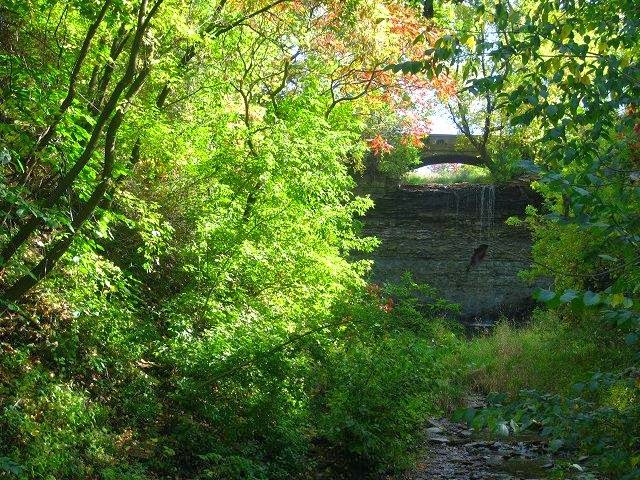 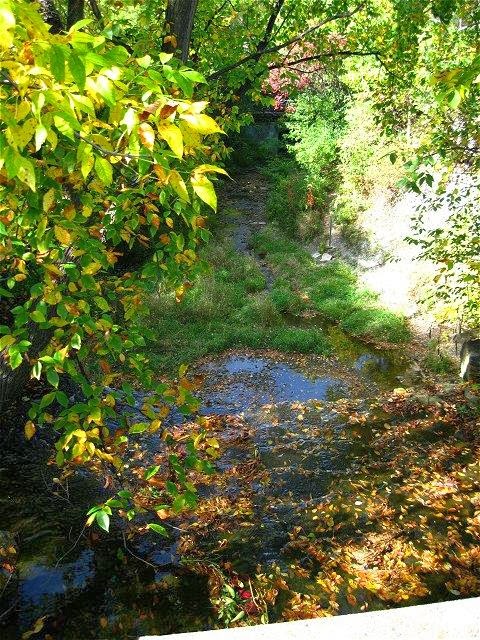 Lovely pictures, Marcia, no matter who took them. Today is forecasted to be sunny and warm so I may get out for a walk myself. Thanks for the inspiration.

Nice pictures. I've been wanting to have a fall get away, but we haven't went anywhere yet.

Gorgeous photos! My husband is a geologist so we regularly seek out places like this. We visited the area years ago when he was teaching a class at UW-Parkside. Lately, we've been walking in a private preserve about 15 minutes away from our house. It's so peaceful and a semi-strenous 45-minute walk along a river. The leaves are now starting to turn and fall, some even before they color. It must be because we've been so dry here the last 2 months. Thanks for sharing!

The sheer beauty must have stunned your camera into silence... Gorgeous.

Beautiful! Even though I'm a summer girl, I try to love each season and each day I'm given -- it helps that I walk my dog every day and he's excited no matter the season or weather. :-)

Ruth -- Hope you got that walk! Weather has been so nice, overall.

Dawn -- My friend would enjoy talking your husband, I'm sure. And the place where you're walking sounds lovely.

Mirka -- I love that explanation.

Barbara -- That's the attitude I try to take, too.

So beautiful! I love autumn--we've been spending lots of time outside, as it just seems cruel to stay in when it's so gorgeous. I don't know that I've ever been happier to be homeschooling than when I could say, "Hey, let's go do our school on a picnic blanket." :)

Gorgeous pictures. I love Wisconsin. We go to northern Wisconsin (Hayward) every year.

Lovely fall scenery! It's important to get away from the desk and enjoy the world!

Some of the pics reminded me of The Slate Pit- a place in the woods across the road from my Grandmother's. All of us grandkids played out there when were small. In fact, after Grandma M's funeral, we all tromped across the road for one final visit before we all scattered back to different states. Thanks for posting these!

Gorgeous photos! I've been outside too much, which is why my allergies are so bad. ;)

Faith -- I love it too, in and of itself, but don't really care for the fact that it's a harbinger of winter.

Andrea -- It is. I probably don't do it enough. I would make a fairly good hermit, actually.

Leandra -- I'm glad these prompted great memories for you!

Kelly -- Boy, there are advantages and disadvantages to just about everything, aren't there?

Gorgeous photos, Marcia. Fall is probably my favorite season, with the cooler temps, the changing colors. So much beauty. So happy you got to be outdoors.

I want to get out more. I have some time off in November to enjoy. We have beautiful places in Florida, although the land is flat and the leaves don't change.

Vijaya -- There's something poignant about all the seasons, isn't there? I'm glad to live where it's not the same all the time.

Medeia -- I'm glad you have time off coming up in November. I always think everybody gets out more than I do, but then I would make a pretty good recluse, to be honest.

Thanks for the outdoor journey. Being inside is the hardest part of writing for me. I really think I need to find a place where winter happens most of the year, then I'd get so much more writing done.

Lee -- I love that about winter -- the cocooning inside part. However, I'm an indoor girl in general, as boring as that sounds.

Great pictures! This is my favorite time of year and usually I'm out hiking and camping, but this year I'm spending it outdoors at my daughter's frequent band events and competitions. Spent all day Saturday at Cedar Point as band chaperone for their performance in the Halloweekend parade.

Kim -- Glad you can enjoy all those great band events outdoors!