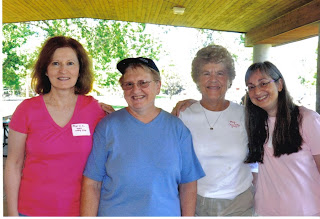 ...During which we goof off by reliving last summer's goofing off, since this is obviously not a winter picture. This is my critique group at a surprise birthday party for the lady in the baseball hat, whose family managed to keep the sizable bash a complete surprise, and who probably wouldn't have worn the hat if she'd guessed what was going down.

This group of writers has been together for 15+ years, during which we've celebrated books, awards, children's weddings, births of grandchildren, a retirement, a college graduation, and did I mention books? And unlike many groups that meet for a two-hour time slot and stick to business, we need our full, non-clock-watching measure of food and conversation -- call it goofing off if you like -- before we ever get down to the business we purportedly got together for.

There's a certain level of ease and familiarity that develops before people can goof off together. Today, why not take a few moments to give thanks for those with whom you can goof off?
Posted by Marcia at 6:00 AM 15 comments: 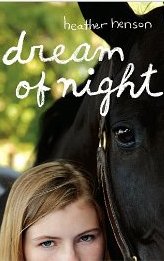 I have to say a few things about readership. The jacket flap gives a suggested age range of 8-12, but I'd be more apt to say 5th grade and up, for two reasons. One is that the emotional nuances are more advanced than the book's reading level; the second is that references to cigarette burns on Shiloh, the "bag of bones" condition of Night, and violence (veiled by Shiloh's confusion, but there) at the climax may be upsetting to some. Still, this is a lovely story of "last chance" redemption, a horse story with appeal to an audience far broader than just horse lovers, and a book with something for adults as well as their kids. An author's note about racehorse abuse is appended. One of my favorites of the "Newbery buzz" books this year.
Posted by Marcia at 6:00 AM 10 comments:

Thinking and Dreaming and Writing

A lot of people have just finished NaNoWriMo, aiming at and in many cases achieving the goal of writing a 50,000-word novel in 30 days. Doable? Many have shown that it is, and some even go on to publish novels that began as NaNo projects. And when you consider that's "only" 1,666.66666666... words per day (see, I said there'd be math in this blog), it really doesn't sound that bad, despite the fact that lightning-fast drafting has never really worked for me. Of course, there's Thanksgiving in there, and if you have to put on the dinner we'd better subtract another day, and let's allow one Christmas shopping day too, because if you don't start on Black Friday you'll probably start soon after -- or continue shopping that you've already begun. So subtract at minimum three days, and your daily total is now 1,851.8518, which is another very cool number. It means you have to write close to 2,000 words per day, but it's still cool.

But maybe you, like I, don't do NaNo. When you're writing, you still want to produce words, right? Lately, that's certainly my goal. My WIP is taking longer than I want it to, which is par for the course in my experience. But sometimes, no matter how much you want to get words down, everything slows to a crawl or even a halt. Sometimes, I feel like this guy:

When my writing slows to a crawl, I've learned it means one of two things: (1) I don't know what comes next, or (2) I've recently taken a wrong turn. The solution to either problem is the same -- it's time to get off the word count treadmill and think, dream, listen. While Don Music may listen to a green frog, I listen deep inside. I may reread the last chapter, ask the Holy Spirit, let my imagination run free in my fictional setting, do a spot of research for an upcoming scene and hit on a new plot point better than the one I had planned, or think about my story in the shower, which is a well-nigh foolproof way of coming unstuck. I tap into something that will start the story, and therefore the words, flowing again. It's when the words and the need to cover the page get ahead of the story that the writing grinds to a stop. Which means that on days I think, dream, pray, imagine or douse myself, I may get very few words written but discover the key to the whole book. I also rediscover the most mysterious, spiritual and joyful part of writing. The part I wanted to live when I started this whole business.

Random.org says the winner of Falling In by Frances O'Roark Dowell AND the bonus MG novel is: sablelexi!

You have 30 days to claim your prize, sablelexi. No later than January 13, email me at marcia at marciahoehne dot com, giving me your postal address, and I'll acknowledge receipt and get that right out to you!
Posted by Marcia at 12:00 PM 1 comment:

Soapbox Series #2 (Reading, 'Riting, Ranting) -- "I Can Write Except for the Grammar, Punctuation, and Spelling."

Enter to win Falling in by Frances O'Roark Dowell through December 12! Scroll down one post.

Yep, and I could be a carpenter if it weren't for that pesky hammering and sawing.

Your tools matter. Your most basic tools really matter.

* Tim LaHaye, who is not a novelist, had the idea for the Left Behind series and asked Jerry Jenkins, who is a novelist, to write the books. But they are both writers, and LaHaye's particular expertise was foundational to the series.

Yes, a novelist is a storyteller. But the novelist conveys his or her stories in, well, prose (and occasionally verse). Which has rules. There are other ways to tell stories: orally, in movies, in song, in art, even in video games. If you want to employ those media, you have to gain whatever skills are required in order to do a quality job. If you want to write a story, you do need grammar, punctuation, and spelling to get that story across. Lacking these, your story will be different from, and less than, your vision for it. Lacking these, you won't get an agent's or editor's time of day. Because they can buy from people who are the complete package.

Doesn't an editor "fix all that"? No. An editor pitches to her employer's acquisitions committee the  most top-quality work she can possibly find, in both story and writing. The editor will write the author a revision letter, sometimes a long one, as the publication process begins, but those revisions won't be about mechanics. A copyeditor, whose job it is to fix light mechanical errors, will go over the manuscript too, but this is a far cry from fixing the work of writers who don't know how to use their tools.

As writers, we have many skills to learn, about storytelling, about writing, and about the particulars of conveying a story through writing. Writers and teachers argue over whether and which of these skills can be taught or learned. A sense of language and a "way with words," many say, must be innate. But grammar, punctuation and spelling are highly learnable, and they aren't something you either had to master in middle school or the chance is gone forever. Taking a class is always an option, but for self-study there are a number of funny, helpful grammar books. Funny? Yes!  Here's a sampling of titles:

Things That Make us (Sic), by Martha Brockenbrough
Lapsing into a Comma, by Bill Walsh
The Elephants of Style, by Bill Walsh
Grammar Girl's Quick and Dirty Tips for Better Writing, by Mignon Fogarty
The Curious Case of the Misplaced Modifier, by Bonnie Trenga

This isn't an exhaustive list by far, and many of these authors have websites and blogs, too. And since, no matter our skill level, we all need to sharpen the tools in our box, I'm sure these enticing titles get plenty of workout from all sorts of writers. How about you -- do you have a favorite grammar/punctuation/spelling book? Do tell!
Posted by Marcia at 6:00 AM 11 comments: 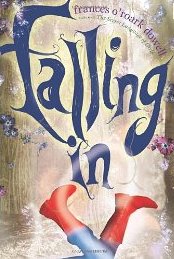 Isabelle Bean doesn't fit in, at school or at home. It's not hard for many of us to relate. Isabelle, star of Falling In by Frances O'Roark Dowell, is an imaginative girl who just knows there's "more." So when she falls into an alternate world on the other side of the school nurse's closet door, she's not that surprised -- except the children in that world decide that her red, pointy-toed boots mean she's a witch. After she convinces them she's not, they urge her to take refuge in the children's camp in the woods so she won't get eaten by the real witch, which is just enough incentive for the unconventional girl to go off on a quest to discover if the "real witch" is any more a witch than she is. An introduction to fantasy for 8-12, with a mystery element, this story also uses a "performance" type of voice, complete with author asides. Though that's not everyone's cup of tea, the effects are interesting to study,  and the book has good potential as a fun read-aloud.

To be entered in the drawing:
Winner will be announced Monday, December 13.

So, come one, come all--and meanwhile have a great day in the world of books.
Posted by Marcia at 6:00 AM 27 comments: