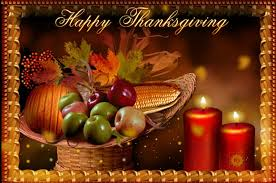 A very happy Thanksgiving to all of my American friends. May your lives be filled with joy, gratitude, health, family and friends, and abundant blessings ~~ Marcia
Posted by Marcia at 6:00 AM 5 comments:

A Tangle of Knots, by Lisa Graff 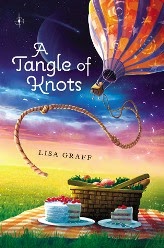 In this MG magical realism tale, most everybody has a Talent. It might be something useful and endearing, like Cady's talent, which is being able to look at a person and know what his or her perfect cake is, and then perfectly bake that cake. It might be something odd, like the ability to lick a hundred envelopes in eight seconds, or quite in keeping with what's expected of a boy who considers himself worthless, such as spitting with the accuracy of a sharp-shooter. Then there are those who don't have a talent, or haven't found it, who are called Fair, such as Marigold, who spends all her time trying one harebrained scheme after another in an attempt to find her Talent.

I saw a fair number of the plot twists coming; ditto which characters would turn out to be related and how. There are a lot of POV shifts, and at one point near the middle of the book I felt like I'd had one too many. But I cared about Cady, Zane, Marigold, and others, and wanted to find out how a dinosaur bone, a lost peanut butter recipe, a hot air balloon, an author who'd lost all verbal ability, a man in a gray suit with knots in his pockets, a place called The Lost Luggage Emporium, and more, would all come together. This novel, which is up for the National Book Award, is a fascinating puzzle that shows how a lot of different people and separate stories can converge at one moment in time.
Posted by Marcia at 6:00 AM 16 comments: 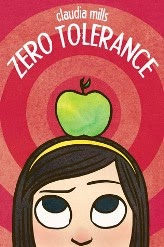 Wow, this is such an innocent-looking contemporary MG novel, yet it pushed a lot of buttons for me. Seventh-grader Sierra is one of those "perfect kids." She's in Leadership Club, sings in the school's elite eight-member a cappella choir, has gotten only one grade ever that was below an A, and makes goal lists for herself that include: "Read a book a week," and "Speak up more in class." Then one day, she brings the wrong bag lunch to school. Instead of her own, she has her mother's, and her mother's contains an apple -- and a paring knife to cut it with. When that knife clatters out of the bag onto the cafeteria table, Sierra looks at it as if it's "a coiled serpent," as any of us would look at any knife that showed up in middle school. "Just put it back in your lunch bag," says one of her friends. "No one's seen it but us."

But Sierra doesn't do that. She's always been the kind of kid that teachers and principals adore; she's never had any reason not to trust the system. So she immediately brings the knife to the lunch supervisor, who turns her into the office, where, under the school's zero-tolerance policy, she receives in-school suspension and an appointment for an expulsion hearing. Effective immediately, no Leadership Club, no choir competition on Saturday, no Mayan history project, no way to stay caught up in her classes. No more life as she's known it.

For a mistake. Not an "I made a bad choice" mistake. She simply picked up her lunch bag from the kitchen counter, as she'd done every morning, and came to school. She had done nothing wrong. In fact, it was her mother who had taken the wrong lunch and left for work earlier, so Sierra wasn't even in a situation where she should have checked two lunch bags to make sure she had the right one.

This book took me straight back to childhood. I was also a "perfect kid teacher's pet," yet after the rare scrape or two I learned several things: (1) You cannot afford a mistake, ever. (2) If any authority figure in a school feels disappointed by you -- in other words, they no longer have you to make them feel successful in their jobs and be a bright spot in their day -- they will turn on you in a flash. (3) You will be punished for honesty. (4) When you are "the perfect kid" you have nowhere to go but down, and if you fall you will fall twice as hard and twice as fast as any other kid. I wanted Sierra to put the knife back in her bag, but of course she could not, and not only because if she had there'd have been no story. It was that she was still a system-innocent. She had no idea it could betray her.

I enjoyed Sierra's parents, and their close-knit family. Her father is a hot-shot lawyer who "always wins" and doesn't really respect his wife, but I got a kick out of him and cheered him on, perhaps because in my day parents did not take up for their children against the schools. The first thing he does is call the media, and the story of the honor student facing expulsion over an innocent lunch bag mistake ends up on national TV. Sierra must report to in-school suspension every day, and in a scenario not unlike The Breakfast Club gets to know the bad kids, especially the baddest of the bad, Luke Bishop, at the same time she is losing some of her perfect, surface-level friends. When Sierra gets an idea to actually do something wrong, I understand her emotionally. People live up to or down to what we think of them; if you're accused of being bad, you will eventually think of yourself as bad, and then it's a short step to doing something bad. "As a man thinketh in his heart, so is he."

The ending is realistic in that Sierra isn't totally judgment-free by that point, yet we absolutely believe that from now on she will be much more open to different kinds of people and different ways of life than she would have been had she not gone through this experience.

I have learned, at this point, that you do the right thing because it's the right thing, and you have to trust God to help you through the consequences, because you cannot trust that the world will treat you right. I'd like to think that Sierra will come this far, too. And, for me, a concern lingers for the Luke Bishops of the world: We want Sierra to have gotten off, because she was a good kid who made virtually the most innocent mistake possible. But suppose Luke, who had a history of trouble, had made the identical innocent mistake? Would anyone, especially the Sierras of the world, cut him a break even though he were innocent? The answer, "Not likely," is disturbing. An excellent MG read, full of ideas and issues to be discussed.
Posted by Marcia at 6:00 AM 13 comments:

Thank you to Julie Whelan at The Paper Wait for giving me the Liebster Award! I'd post the picture, but it's being shy about showing up for me. This award is simply a fun shout-out from one blog to another, and like most such awards, has a list of questions to go with it! As I tend to enjoy interviews of all types, I'll gladly play. Here are the (possibly edited) questions Julie posed:

1. Where is your favorite place to write? In my basement dungeon garret bunker office, no question. If I tried to spend that many hours not in my proper chair not using my desktop (which I consider my real) computer, my chiropractor would really have his work cut out for him. Also, it's cozy and not distracting down here. If I had people around me or a window to look out of, that wouldn't be good.

2. What's the worst advice you've ever received? I read this in The Writer eleventy-fourteen years ago when I started writing: Writers should not have a day job, because they won't really pour themselves into their writing if they have a job to fall back on. Whew. Follow that at your own risk.

3. When you were a kid, what did you want to be when you grew up? A writer. Yes, at times I gave other answers to this question, but that was only to look good/normal. The only career desire I ever had that was not a passing fancy was to be a writer. Ha, which means that advice up in #2 looked pretty good to me. The answer other than writing that I probably should have given is "Librarian." But it took me decades to figure that out, and, really, everything has turned out fine.

4. What's your favorite book(s)? Oh, my goodness, the great unanswerable. Let me give you the most recent: Splendors and Glooms, Wonder, Masterpiece, The Penderwicks (all), anything by Gary Schmidt, Richard Peck, Kate DiCamillo, or Ruta Sepetys, When You Reach Me, Marcelo in the Real World, The One and Only Ivan, and that which must be marathon-reread on an annual basis, Harry Potter.

5. What's in your TBR pile? Story Physics, by Larry Brooks. A Dog Called Homeless, The Real Boy, W is for Wasted, The Cuckoo's Calling. That is a very short list for me, and it'll get a lot longer before it gets shorter.

6. If you could live anywhere in the world, where would it be? (a) right here in Wisconsin's Fox River Valley, (b) I could be happy along the Milwaukee-Madison corridor too, especially near water, (c) wherever my family is.

7. What distracts you most from writing? The internet.

8. What is your biggest source of inspiration? An amalgamation of remembered childhood emotions, family stories, and prayer/scripture.

9. Why do you blog? Because I enjoy it, it's an outlet for writing other than my fiction, and it's a way to make friends with like-minded folk. And I get to think in public. :)

10. If you could travel anywhere in the world, where would you go? England. Castles, cottages, and villages with gardens. Also Israel. But in my heart of hearts, I'm a homebody.

I know that a lot of people have gotten this award already. I, for one, love to read these little insights into people, so anyone who feels so inclined, please consider yourselves tagged. :)
Posted by Marcia at 6:00 AM 17 comments: