Crit Group Celebrations, and a Talk by Editor Wendy McClure

Our critique group met the other day, at Mary's house, and Mary had a birthday. So we had to celebrate. Left to right, we are Susan, Marcia, Mary, and Connie. 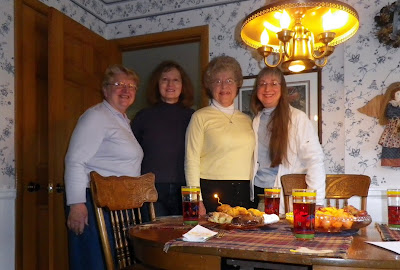 Then, Susan had a book out! Route 2, Box 12 is the third collection of her weekly "life on Sunnybook Farm" columns that have appeared in several regional newspapers since the early 1980s. So we had to celebrate again. This time, we are Mary, Marcia, Susan, and Connie. 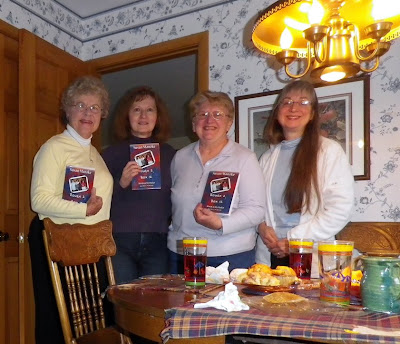 And yes, we did actually do some critiquing after all this. :)

This past Saturday, April 20, Wendy McClure, Senior Editor at Albert Whitman, spoke at the SCBWI-WI Spring Luncheon. She gave an entertaining program on her favorite MG childhood series, the Little House books. The most interesting part of the program for me was the excerpts from Laura Ingalls Wilder's early drafts; the long, single-spaced editorial letters sent to her by her own daughter, Rose Wilder Lane; and rejection/acceptance letters, the former from RWL's own literary agent and the latter from Knopf; which we got to see onscreen through Power Point.

I was really struck by this: Laura's early attempts were (1) all telling, and (2) from a distant observer's POV. Rose told her she had to be inside Laura, and Rose was right on. While listening, I thought about the need to allow first drafts to be poor if that's the only way they will come out, about how we sometimes can't put the emotional content into our stories until we can first bring ourselves to record them at all, about how steep and difficult the climb to publishable-prose level is for all of us, and how the newbiest of writers can go on to produce something special, even timeless.

And I thought of the kinks, rocks, and boulders in the road to publication even after you succeed. Because it wasn't Knopf who published Little House in the Big Woods, even though they accepted it. The year was 1931, and Knopf closed their children's book imprint because of the Depression. The book had to go back on the market and sell again, this time to Harper, who did publish it.

All of the biggest successes we can think of were achieved by people who, when they first set out, couldn't be sure they'd accomplish a thing. And this is why I believe, on every level, that life is a faith walk.
Posted by Marcia at 6:00 AM 20 comments:

Of Fiction Writers and English Majors

I was thinking recently about something John Gardner says in his book On Becoming a Novelist. He says that taking an English major in college isn't necessarily the best route for someone who wants to be a writer. He suggests instead that you major in another field in which you're greatly interested, so you have something to write about; or that you major in philosophy so you know what questions are important; or psychology so that you understand people; and that whatever your major, you consider aiming toward an occupation you like but that won't eat up all your time (or that can be part-time) so you can write. The main problem when writers major in literature, Gardner says, is that literature scholars and writers read differently. Lit scholars are constantly considering theme and symbolism, and say that writers are "showing" us things, or "demonstrating," "depicting," or "exemplifying" things. Writers consider the story, and read to see how storytelling effects are achieved. Lit scholars take literature apart. Writers put it together.

Gardner's book gave voice to a lot of feelings I had when I was a teen, secretly wanted to be a writer, and ultimately decided not to be an English major. Already, English classes had about destroyed reading for me. I could no longer choose reading matter that wasn't sufficiently highbrow, couldn't decline to read something that bored me silly, couldn't enjoy a story without dreading the questions about symbolism, theme, and what the author was "saying" that would be asked in class the next day. My jr. high English teacher, who mainly taught HS English, once assigned our class to write a "novelette." I thought I'd died and gone to heaven. In presenting this assignment, by way of encouraging appropriate length, he said, "Maybe you'll spend an entire page describing one little flower petal." Gak, I thought. No, that is not what you do. Another time, he asked the class whether we thought a writer invests great thought into placing every single symbol in the story just so. It was very hard for me to buck a teacher, but I said, paraphrased, "No, they don't. They write a story and some of it just happens." He didn't reply, just smiled the small amused smile he usually wore when a student stepped in it. But this was one of those rare occasions when I didn't care if I gave the right answer in the eyes of the teacher. I knew I had this one nailed. And even though I continued to ace his English classes and all the ones through high school, I knew I couldn't wait to leave formal lit study behind.

So what makes me think of all this now? I think it's the new emphasis I see on outlining and structure today, compared to the pantsing that most writers seemed to be doing when I started out. I remember reading an article in The Writer in which the author spoke of "how gropingly" her novels were put together. Most everyone else said the same. But now we are all about first and second plot points, midpoints, beating it out, storyboarding, six core competencies, Story A and Story B, and in some cases even declaring that, for example, the theme shall be stated on p. 5 (or 4.5% of the way in). Don't get me wrong: I find many of these ideas fascinating and helpful, and I've become more of a planner as a result. I suspect the emphasis has swung in this direction because we are looking for the key to standing out in this competitive market. But it also makes me wonder if the writer is thinking a little more like the lit student these days.
Posted by Marcia at 6:00 AM 18 comments: 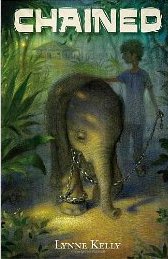 2012 must have been the year of the MG animal story. Though some of the books were fantasy, some realistic, and some a mix of both, I found every one I picked up to be engrossing. Chained is no different, especially if you have a soft spot for elephants. While I must say that cats are my animal of choice, this book sold me on its cover alone.

Hastin is a boy who lives in a desert region in India with his mother and younger sister. Chanda, the girl, has been bitten by fever mosquitoes, and when her illness becomes desperate they take her to the hospital even though they cannot afford it. They learn her treatment will cost 4000 rupees, money they do not have, so Amma (mother) goes to work as a housekeeper in appalling conditions to earn the sum. But wait! There suddenly appears a man named Timir, who pays the debt for them. There's a catch, of course. Timir once owned a prosperous circus, and he dreams of returning to his glory days. He needs an elephant keeper, and asserts that Hastin can do the job. Besides, this is going to be a grand adventure, and when Hastin has worked for Timir for a year to pay the man back, he may return home. The truth, as we might guess, is that Timir has no intention of ever letting Hastin go. But the more immediate problem is that Timir has no elephant. He expects Hastin to trap one in the jungle.

This, he does, with the help of men who dig a pit large enough for a young elephant to fall into and not get out of. Hastin is drawn to the elephants from the beginning, even giving them names as he spies on a herd going to the river for water. When one of his favorites, Nandita, falls into the trap, he's so conflicted that he tries to set her free before the circus men find out. But, though Hastin and Nandita come to love each other in Timir's ragtag circus, both are chained: Nandita literally, and Hastin figuratively, to the debt, and even more so, to what Timir intends as permanent slavery. It will be a long time before either of them is free again.

All these characters, save Timir, are immediately lovable. There are two other important characters also. Sharad, the elephant trainer, has a "good past," but it's buried under a ton of pain and he has become a rigid, mean trainer as a result. And Ne Min, the circus cook, is a wise, grandfatherly type who obviously loves elephants but is hiding some secret shame.

This is a wonderful debut novel. Characters, prose, structure, action, research -- all are excellent.  Highly recommended.
Posted by Marcia at 6:00 AM 24 comments:

Author Linda Skeers is the "giggle" portion, and from 10am-12:30pm she will speak about what makes humor work in books for all ages -- and how to tickle the funny bones of readers and editors. I am the "generate" portion, and from 1:30-4pm I will present my Idea Explosion Workshop and talk about how to get and develop ideas for the books you are meant to write.

Linda and I will be critiquing mss. as well. We're looking forward to a great day with you. :)
Posted by Marcia at 6:00 AM 18 comments: