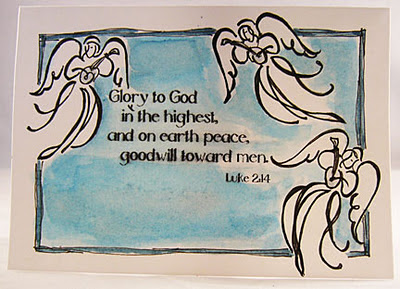 Of File Cabinets and POV 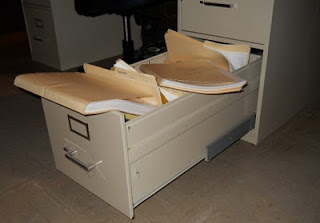 I've been thinking about POV lately, and how I've used it thus far in my writing career. Curious, I turned to my dead manuscript file. (Yes, ordinarily the folders are put away and the drawer is closed. Or the cats would live on it permanently. And I'd trip over it. Fortunately, now that I print out much less, this poor drawer is getting a break.) Recently I tried to count how many novels I've ever completed, meaning how many reached "The End" of at least one draft. (There's no counting how many I've started in my life.)
As best I can tell, the stats look like this:
Really, it's not as narrow as I thought. And though I'm glad I haven't really written in 3rd close, with one POV character, All The Time, which is the way it feels, I still want to branch out, sharpen, explore, develop, my use of POV. My shiny, new WIP idea, which I really, really hope I can start in January after I get the current revisions off my desk/mind/screen, calls for 3 third-person POVs, some omniscient "in-between" sections, and a less close feel overall. It's not enough to merely want to experiment with POV, of course. The choice has to be the best one for the story. I believe it is, and I'm eager to dig in.
How about you? Are you drafting, revising, researching, outlining, or "filling the well" these days? Challenging yourself in any particular skill?
Posted by Marcia at 6:00 AM 25 comments:

I read something recently that gave me pause, and it was this: That the four main elements of fiction are character, voice, plot, and theme.

I didn't agree with it. On further reflection, I still don't. For one thing, where is setting? Without a sense of place, you're missing a necessary element, the means of creating mental pictures, that allows the reader to enter into your story.

I could add it to the list and have the Big Five: character, voice, plot, theme, and setting. But I'm still not satisfied, and I know why. For me, voice comes under the umbrella of character. It's not separable from it, and is subject to it.

Voice is important, of course. Gotta have it. But I've never been on the "voice, voice, voice, voice, it's ALL voice" bandwagon. Recently, I've learned more about voice than ever, through the most thorough critique I've ever had, from the fabulous Kathleen Duey. But the very experience underscored even more, for me, that voice, whether you're in first person or third, is about character (as is POV). Realizing and increasing the close tie between my character and the voice, even in third person, helped me boost my WIP to a higher level.

And proved false to me another notion: That you can receive/give help in fixing plot, but not voice. "The voice is either there or it's not." Well, no. It can be strong in places and falter in places. It can slip up in individual word choice. And you can both receive and give help in fixing it. As a writer and teacher, I've been on both sides of that coin. :)

But here's a fifth element that I would argue could be added to the list: quality of prose. A way with words. An ear. The way one's talent comes through in the writing itself. Which is related to voice, but different from it. It's necessary, and it's the only one of the elements, I'd argue, that has to be somewhat inborn. Because you can't just fit good character, setting, plot, and theme together and out comes a great story. The writing itself, the vehicle, has to be there, and though a writer learns to hone this through reading and writing, it is hard-to-nigh-impossible for someone else to help you with it.

Here's my stab at a list of the basic elements of fiction: character, setting, plot, theme, and prose. (Who, When/Where, What, Why, and How?)

What do you think? Am I nitpicking semantics? Have any "rules" you'd like to smash today? :)
Posted by Marcia at 6:00 AM 21 comments:

Do You Write During the Holidays?

I didn't used to keep a calendar or weekly schedule as regularly as I do now, except for the period between Thanksgiving and December 24th. When my kids were young, cleaning up after the Thanksgiving turkey feast was always accompanied by digging out a calendar on which I'd plot out the entire forthcoming four weeks. Those weeks of course contained the kids' school concerts and Christmas pageants and accompanying prep. (One of the more interesting projects involved scribbling on a wicker basket with markers for a costume accessory. Well, at least I didn't have to figure out how to clothe a shepherd.) Those weeks contained what I considered the requisite number of cookie- and candy-making sessions, each assigned a time slot to be sure they'd all fit. And need I mention tree-buying and trimming, decorating, and shopping, none of which could be done in my jammies in front of a screen in those days? And the parties and gatherings held in the workplace, the church, at family members' homes. By the time my calendar was completed, every morning, afternoon, and evening was filled. But were any of them filled with writing? Not so much.

I'm not much for a packed schedule; never have been. I am a writer, a reader, a contemplator, and a pray-er, and you can't do any of that when every minute, or even just every half-day, is jammed with activity. So, one year, I said to myself, "I am no longer willing to give up writing for the month of December. I mean, actual employed people actually work during December, don't they? So shall I."

But I had to make room in the schedule, and I actually found that pretty easy. What went out the window? The cookie-baking! I'm still good for a couple of batches of fudge and some chocolate-covered caramels, but I love making those, and I do it when a desire to putz quietly in the kitchen comes over me. I've also streamlined the shopping and simplified the decorating, but the big difference came with dumping the cookie-baking, which was more a chore than anything else. I guess the bottom line is that I do only the prep I enjoy doing for itself.

And I write during December. Yeah, it probably helped that I was on deadline when I made the "I will write in December" vow. But my new, good habits lasted, and I enjoy the entire holiday season more now.

Of course, it's not only Thanksgiving through New Year's that can derail one's writing. Summer is another time that can speed by with little to show for it, literarily speaking. Do you have periods during the year when your writing gets crowded out? Have you found a solution? Care to share?
Posted by Marcia at 6:00 AM 30 comments: