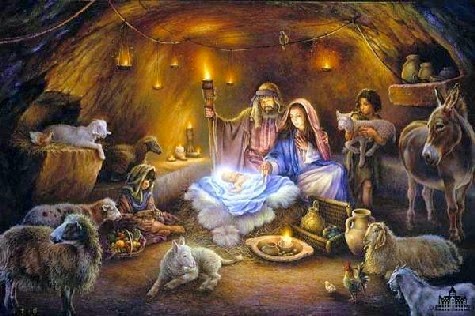 I hope the real stable was as cozy as this looks. I love how even the animals seem hushed and attentive. When I think that even birds and baby chicks, as well as donkeys, sheep, and goats, were privileged to witness the birth of Christ, it's a reminder that no creature on earth can be dismissed as insignificant. We have no idea what destiny may be assigned to such as these.

Merry Christmas, everyone.
Posted by Marcia at 6:00 AM 6 comments:

The Swift Boys and Me, by Kody Keplinger 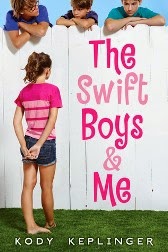 Nola, age 12, has been friends with the three Swift boys for her entire life. In fact, they live in the other half of the duplex. Brian, the oldest, is sensitive and kind. Kevin, the youngest, is constantly talking. And Canaan, the middle brother, is Nola's age, and he has always stood up for her.

Then one day, Mr. Swift gets in his car and drives away. He's left his family, without even a goodbye. Ironically, Nola saw him go, waved to him, and received a wave back, which, as she says, was more of a goodbye than the boys got.

And the Swifts fall apart. Kevin, who we find out blames himself because the last thing his father had told him to do was quit talking, goes mute. Brian tries to run the household for a while after their mother sinks into depression, but it's too much for him and in effect he runs away from home, staying first with one friend and then another. And Canaan takes up with the mean boys. Far from sticking up for Nola, he's now one of her tormentors.

Nola tries to support the boys, but succeeds only with Brian, and then only temporarily. She also tries to find their father -- mostly because she wants everything to go back to normal, which is no doubt realistic -- and actually does locate him living with another woman in the next town over. But Nola's life is changing, too. Her mom is remarrying, and the couple's plan to buy a house means Nola will have to move out of the duplex. And are the boys there for her? No, they are not.

My favorite aspect of the book is the characters. I liked Nola, the boys, her mom, the new stepdad, and Nola's other friends, Felicia and Teddy. We become disillusioned with Canaan, which I think is inevitable and probably the author's intent, not only because of how he's treating Nola, but because we come to suspect that Canaan's past bad-mouthing of Teddy was completely undeserved. In fact, now that Nola is less tied to Canaan, she is less dependent on his opinions and more able to stand up for herself.

The cover is a bit "cuter" than the novel itself, and does not portray Nola's slight overweight, which is often referred to in the story. (But as one of my editors once said, "That's marketing for you!") And it's possible that Nola understands everything just a bit too neatly at the end, although the plot threads are by no means tied up in a perfect bow. Recommended.
Posted by Marcia at 6:00 AM 10 comments:

My weekly post got away on me this week. But, on both my editing job and my own writing, I've been 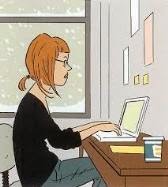 I'll be back next Thursday, though. I read another book to share with you. Till then, have a great one. :)
Posted by Marcia at 9:18 PM 5 comments: 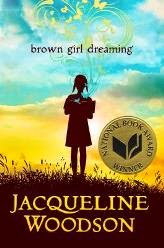 Oh, my. This is a simply beautiful book. Books written in verse aren't for everyone, but I tend to like them because the emotion is concentrated and the language precise. I didn't say "verse novels," because this isn't a novel. It's a memoir.

I think most writer/bookworm types are naturally drawn to a book about how a writer grows. To view the writing through a wider lens, it's about a girl finding her voice and her purpose. It's also about encouragement: I as a reader find myself a bit breathless at the fact that Jacqueline Woodson said, and told herself, that she wanted to be a writer from a very young age, and she did it. Oh, how she did it. And to broaden the scope even more, it's very much about the African-American experience in the days of the struggle for civil rights and beyond.

There are surprising bits, such as Woodson's upbringing as a Jehovah's Witness, and gut-punching bits, such as her younger brother lying in bed at night, eating paint chips off the walls. There are arresting lines, such as "Even Salome intrigues us, her wish for a man's head / on a platter -- who could want this and live / to tell the story of that wanting?" and lines that raise ire, such as her mother's warning concerning storytelling: "If you lie, one day you'll steal." As a matter of fact, I don't reject that statement in general; I think lying is a form of stealing; it's theft of the truth. But the claim, even by writers (about which I have ranted in the past), that storytelling is lies just makes me all kinds of crazy. Tell that to Jesus or to Nathan the prophet.

Although I'd like to know what Jackie's siblings did with their lives as well, we don't find that out. However, the book cries out for photos and that cry is answered; they're included in the back.

There aren't many books, when it comes right down to it, that should become required reading; this is one of them. Highly, highly, highly recommended.
Posted by Marcia at 6:00 AM 10 comments: