Random.org says the winners of this month's critique giveaway are: Bish Denham and Anne Spollen!

Here's the procedure. Email me at marcia at marciahoehne dot com:
Congratulations to Bish and Anne, thank you all so much for stopping by and entering, and by all means enter again next month! Wishing you all a great day in the world of books...
Posted by Marcia at 12:00 PM 7 comments:

February Book Pick: After Ever After by Jordan Sonnenblick 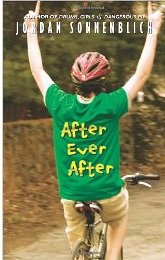 This winner of the 2011 Schneider Family award at the middle-grade level is a fantastic read. Jeffrey, age thirteen, is a leukemia survivor. As tough as things have been, his parents and his brother eight years his senior have always been there for him. But Jeffrey has a way of eavesdropping on conversations that tell him more than he'd like to know. Such as the reason his brother Steven has quit college to go to Africa and play the drums: he needs a break from Jeff's dependence, and from the family who made everything all about Jeff during his illness.

This book is about how Jeffrey copes with the fact that "cancer survivor" is a label that follows him everywhere. To the extent that his best friend is also a cancer survivor, having had TWO forms of cancer. To the extent that he suffers lasting effects from chemo and radiation in the form of a limp and near-complete hopelessness with math. Jeff's darkly humorous friend Tad uses a wheelchair most of the time, and both boys have special permission to take notes on a laptop in class due to motor skill problems.

Eighth grade starts on a positive note, though. He instantly bonds with a friendly, funny new girl named Lindsey, who happens to be gorgeous on top of it. He makes a pact with Tad: He will help his friend get in shape to walk across the stage at eighth-grade graduation if Tad will help him try to pass math. Soon, though, he finds out how crucial passing math will be: if he cannot pass the state-mandated achievement tests, he will be held back in eighth grade. And when your father is an accountant and you're not even that sure he likes you these days, the pressure is even greater.

This is one of those books that tempts me to gush. The voice, the character growth, the portrayal of two different experiences of cancer survival -- the more upbeat Jeff's and the less confident Tad's -- make for a very absorbing read. I love the sudden insights into a cancer survivor's experience that you know in your gut are wholly accurate even if you've never had cancer, such as Tad's realization that his parents had his younger sister in case he didn't survive, and figuring out how to have "the talk" with people when they become important to you.  This book is serious, yet fun; heavy, yet normal middle school stuff; and Jeff is hugely likable. Books and movies don't make me cry much. This one made me tear up.

SPOILER: Strictly from a writer's POV here, I knew something at the start of the story: Tad had to die. Both of these boys would not be able to survive; Tad had to portray the other experience, the sadder outcome. Before he ever reaches eighth grade graduation and that walk across the stage, Tad relapses and deteriorates quickly, his death all the sadder because it's a shock, and it happens the day Jeff triumphs in a bike ride to raise funds for cancer research. When Jeff accepts Tad's diploma at graduation along with his own, and visits Tad's grave in the last chapter, there's no artificial tear-jerking. If reading fiction is about an emotional experience, this book delivers in spades.

I picked it up not knowing it's a sequel to an earlier title, Drums, Girls and Dangerous Pie, told from Steven's POV after Jeff, age five, is diagnosed. Though you may want to read the books in order, After Ever After completely stands alone. HIGHLY recommended.
Posted by Marcia at 6:00 AM 8 comments:

It's critique time. Enter to win! Here are the rules and caveats:
So if the above sounds good to you, let the entering begin!
Posted by Marcia at 6:00 AM 12 comments:

Random.org says the winner of Moon Over Manifest by Clare Vanderpool is: Vijaya!

You have 30 days to claim your prize, Vijaya. No later than March 14, email me at marcia at marciahoehne dot com, giving me your postal address, and I'll acknowledge receipt and get that right out to you!
Posted by Marcia at 12:00 PM 3 comments:

Okay, so I'm not sure where this post is going. I'll start out by saying that I'm not a military type. At all. I greatly respect those who are, because I could never cut it, physically or emotionally. I was raised by a father who was part of the WWII Marine landing on Tarawa. He survived, though injured and at one point given six months to live. I learned early to ask no questions. I had to get my answers from books. (And it was fictional accounts that brought the horror of Tarawa to life. Nonfiction may be facts, but fiction is truth.) I'm sure my father suffered from what would now be called PTSD. I grew up giving thanks every day that I was a girl, because everybody knew boys went to war. It was inevitable. And yet my dad not only went, but rushed to enlist after the bombing of Pearl Harbor. Incomprehensible.

But I've learned a few things, and come to believe a few things:
Attack came. Attack that I knew was spiritual but manifested in the natural. I warred. In prayer. Hours a day. Quiet. Loud. Confident. Scared. Strong. Broken. In every way I could learn about and every way I already knew. And. Did. Not. Give. Up.

And won. Intercessory prayer is, primarily, war. Who knew?

And then came the books on writing. The Art of War for Writers, by James Scott Bell. And next, so help me, The War of Art by Steven Pressfield, the latter of which names our enemy "Resistance" and exposes its many guises and deceptions. How can I help but conclude that the concept of writer as warrior is something I need to understand, and understand now?

Pressfield says this to those who let Resistance keep them from their craft: "You shame the angels who watch over you and you spite the Almighty, who created you and only you with your unique gifts, for the sole purpose of nudging the human race one millimeter farther along its path back to God. Creative work is not a selfish act or a bid for attention on the part of the actor. It's a gift to the world and every being in it. Don't cheat us of your contribution. Give us what you've got."

If that weren't enough, St. Bernard of Claireaux said, "Every word you write is a blow that smites the devil." 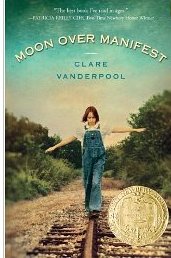 The ALA awards loved historical fiction this year! I find it delightful and amazing that historical novels swept the Newbery category, and interestingly enough, more than one of the books feature kids leaving home to live with others during the tough times of the Depression and WWII.

The gold-medal winner, Moon over Manifest by Clare Vanderpool, is a debut novel about twelve-year-old Abilene Tucker. She's a rough-and-tumble Depression child, used to hopping trains, growing up without a mother. When her dad gets a job in a place he deems too rough for young ladies, he sends her to spend the summer with an old friend. She jumps off the train in Manifest, Kansas, her father's hometown, hoping to learn more about him by investigating his earlier life. The book features a full cast of colorful characters and a dual storyline that alternates between Manifest in the years 1939 and 1918 -- America's entry into WWI. An ambitious overview of US history in the early 1900s, and a lot of story, all in one package.

To be entered in the drawing:
Winner will be announced Monday, February 14.