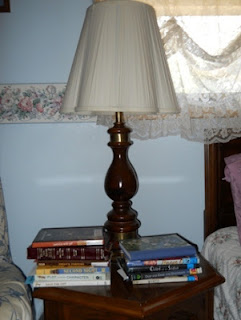 Maybe this isn't quite representative. The TBR pile isn't as tall as it usually is. But usually the books are piled in a single stack, and the table contains hand lotion, a water bottle, a pen cup, a pad of paper, a tissue box, a book light, a calculator, a manicure set, and lip balm. I've spared you all that, all the better to see the books. But they don't show up very well here, so let's try a second shot... 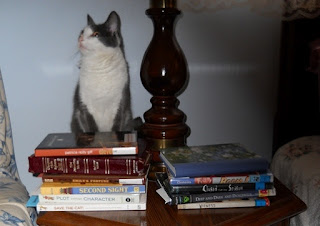 Not quite so good yet? Well, Mewy has always been a rather literary cat,
um, "participating in my process" in my office and occupying my lap when I read. So I guess she figured she should pose. Unless, of course she's here because she can read titles...﻿ 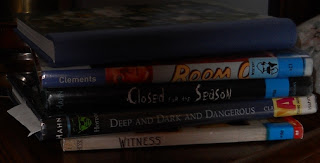 I was particularly looking for MG mystery when I compiled this stack, so that genre predominates here. On the right-hand side, we have, from top to bottom, my journal; Room One, by Andrew Clements; Closed for the Season and Deep and Dark and Dangerous, both by Mary Downing Hahn; and Witness, by Karen Hesse. 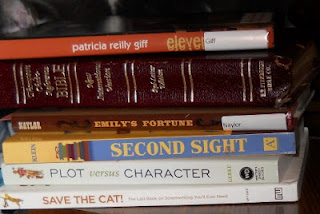 And on the left, we have, from top to bottom, Eleven, by Patricia Reilly Giff; the Thompson Chain Reference Bible; Emily's Fortune, by Phyllis Reynolds Naylor; and three books on writing craft: Second Sight, by Cheryl Klein; Plot vs. Character, by Jeff Gerke; and Mewy's choice, by Blake Snyder -- Save the Cat!

When Introversion and Math Collide

When I was a university math major, in one of the later courses, I was sitting in class with a girl named Susa, listening to a lecture. We'd been exposed to a countless number of theorems over the many semesters, and that day the prof presented yet another heretofore-unheard-of mathematician and his theorem. "Someday," murmured my seatmate, without taking her eyes off the board, "there's going to be a Susa theorem."

My thoughts exactly. And, talking with a friend recently about how introverts need to refuel after an exhausting period of extroversion, I realized the time has come. So, I give you:

The approximate number of Introversion Hours (IH, or I-Hours) required to refuel an introvert after a given amount of extroverted energy release can be expressed as

﻿
Where XH is the number of Extroversion Hours,
s is any portion of the XH during which the introvert felt unwell,
dB is the decibel level of noise the introvert was exposed to during the XH.

As a simple example, let's say the introvert attended a three-hour party where loud music was played and had a headache the entire time. The approximate number of I-Hours the person will require to recuperate is calculated as follows:

So we see that, if we include the hours spent sleeping, this poor soul needs virtually an entire day to refuel.

If, however, the introvert felt well during the party, and the loudest sound was normal conversation, we have

In this case, we can expect the introvert to be able to handle about 6 hours of non-isolation during the following 24-hour period.

Caution: Empirical data only. No writing was slacked off upon in order to pursue rigorous scholarship in the writing of this theorem. :)

Now, if this fiction-writing thing doesn't pan out, maybe I can write a textbook?
﻿
﻿
Posted by Marcia at 6:00 AM 15 comments:

Annie McMahon tagged me recently with this "11 questions" meme. It looks like fun, a good way to do some introspection (something I hardly ever do -- yeah, right:)), and a good way to get some glimpses into other people, so here's the deal:
11 Random Things About Myself
11 Questions, Answered
11 New Questions For 11 New Folks!
Okay, now to tag some folks. Some of you may have done this already, so pardon my duplication. :)
My, this makes for a long post. :) Have fun!
Posted by Marcia at 6:00 AM 20 comments:

I should be doing a book pick post (hmmm, there's an interesting phrase) about now, but I've not had a lot of reading time lately, and this picture tells the story. However, I am reading (slowly) a MG novel that I'm really liking, and I'll post on it probably in early September. Meanwhile, life has been blessed with days like this. Longer post next week! :)

Here's the procedure. Email me at marcia at marciahoehne dot com:
Congratulations to Sharon and Faith, and thank you all so much for stopping by and entering. Wishing you all a great day in the world of books...
Posted by Marcia at 12:30 PM 9 comments: