The Horizontal and Vertical of Writing

Here's something I like about writing: It's not like running in the rat race as much as it's like finding your own little plot to till. It's not like climbing a career ladder as much as it's like being an artisan-entrepreneur, crafting and selling your own wares. Writing isn't about staying above the people on the lower rungs and hoping to surpass or knock off the people on the higher rungs---and I think the generosity among writers, especially children's writers, bears that out. Writing is about finding your place in the field of endeavor. About joining the guild. I don't know about you, but ever since high school graduation, when age stopped determining pecking order, I've wanted less of hierarchy and more of people simply finding their places and filling them. If you're at all familiar with 1 Corinthians 12, that's pretty much what I mean.

Some hierarchy is necessary, of course; we need authority at times, and need to respect it. As writers, we may place ourselves under teachers for a period of training, and we cooperate with and often submit to editors who help us make our work better. But generally, a ladder, race, or stair-step model doesn't really work for writing, or probably for any art. The only constant vertical relationship I have as a writer is with God. The rest is all horizontal. I work beside others, and share the journey with them, but while I work I'm not thinking about whom I can beat out or who's going to climb higher than I. I just try to write the stories I'm given to write, and learn as much as I can about achieving excellence in craft and marketing.

In The War of Art, Steven Pressfield touches on this topic and asks this question: If you were the last person on Earth, would you still be pursuing your activity? If the answer is no, he maintains, then that pursuit is not really your territory. You were doing it mainly to impress people, and now there's no one left. But if you'd still be doing it despite being the last person on Earth, because you were made to do it, then that pursuit is your territory.

I read a book by a man who told of his mother's lifelong heart's desire: to be a dancer. "Life got in the way," as we often say, and though she had a full and successful life in other ways, she never seriously pursued dancing. But after the woman entered a nursing home, grew very frail, and became more and more affected by dementia, her son found that whenever she had even a moment's chance to step out of her wheelchair, she would try to dance. She really couldn't do anything anymore, didn't even know her family members some of the time. She was, in a way, the last person on her Earth. And what did she do? She danced.

You know one thing that has always bugged me? Well, not always. It began bugging me when my kids were young and society started telling all kids, "You can be anything you want to be." Because---no, you can't.

It didn't bother me when I was a child myself, and my dad told me that. Yes, back in the day when girls were told they could be either teachers, nurses, or secretaries, provided they remained unmarried, my father actually told me I could be anything I wanted. At the time, I felt euphoric. But in the long run, bless Dad's well-meaning heart, it just wasn't helpful, and I say that as the holder of a business degree who has just about zero head for business.

It didn't matter that I entered college having never met the academic subject I couldn't master; in fact, that made it worse. I chose, and stuck to, a math major (my other degree), but otherwise I barreled around my school's academic offerings like the proverbial bull in a china shop. "Okay, should I maybe pair that with a biology minor? I like biology. Maybe I could teach... Hey, wait! Computer science. They say computers might be big someday... Naw, English! How obvious! But I'll have to read a string of boring classics... Hmm, okay, I'm at the end of my sophomore year, halfway done. Options are getting limited. Business. Huh, that should make me employable, and I've got time to add it as a major... What's that? They're starting an accounting major? That might be cool. But if I end up doing taxes the rest of my life I'll scream... My friend said, 'You can always work at a bank,' but I dunno... Maybe I could be a stockbroker!"

Nobody can be anything, because nobody is suited for anything, even if they like or want it for a time. More than being told we can be anything we want to be, we need to learn who we're meant to be and aim toward that. We need to figure out how to discern the good, the better, and the best. And to face that saying yes to the best may mean saying no to the good and the better, maybe just for now, or maybe forever. What we need to equip kids and ourselves with is a way to narrow down all the delights that beckon and decide which are for us and which are to be left to others. In short, we need to find our own particular calling and destiny.

If that's not writing (or science, or ministry, or stockbrokering), we either won't make it, or will feel unfulfilled when we do. If it is writing (or medicine, or fine arts, or mothering), we have no viable choice but to set aside the excuses and distractions, even the good ones, and do it.
Posted by Marcia at 6:00 AM 22 comments:

Genius and the Writer

My 5-year-old granddaughter wants to be a princess in the worst way. She adores pink, fluffy dresses and sparkly shoes, and I'm sure owns a tiara for every day of the week. (My personal belief is that the princess-longing, which seems stronger today than ever before, though it's not new, mirrors the heart's desire to be daughters of God.)

Did I ever want to be a princess? Sure. But I was always taller and bigger than my friends, my mom wouldn't buy me a pink, fluffy dress, and she always kept my hair cut short for her own convenience, so I had a hard time feeling like one. But what I wanted to be even more than a princess? A genius.

With this, I had somewhat better luck. :) Especially in the early grades, I was always the top of the class and scored, way, way beyond grade level on standardized tests. When my father, an educator, revealed my IQ to his boss (by way of discussing the success of a teaching technique) the man about dropped his teeth, and when going for an advanced degree my dad even wrote a seminar paper on gifted children, centered on, ahem, me (by name). My dad has passed on, and I have his papers in my possession now. And yes, it's really interesting for me to read what he had to say about me. :)

So when I was reading a bit about writing and genius lately, and simultaneously recalling what the main character in John Green's An Abundance of Katherines said about himself: that he wasn't a genius, but a prodigy (a prodigy being one who shows great brilliance early, but whom others eventually catch up with and even surpass, which is also a much better label for me), I became more curious about the nature of genius, and specifically, what a "writing genius" is.

I learned that in ancient Rome, a genius was a guiding spirit. Because people who achieved great things were then thought to have a very powerful angel (to me, it's an angel) assisting them, the word genius eventually also came to mean talent, intelligence, or extraordinary inspiration. Whether the guidance, and what was produced, seemed extraordinary or not, each person had that guiding spirit, guiding him or her straight into the center of their divine calling.

So it isn't so much whether we are a genius, but that we have a genius. So I'm not a genius, but I have one. We all do; whatever our calling is, we have divine help ready to lead and guide us to it and in it, into the originality that is ours to produce. 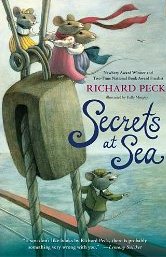 Richard Peck is one of my favorite authors, and animal fantasy perhaps my favorite kind of fantasy. So I was eager to pick up Peck's newest MG novel, Secrets at Sea, and I was not disappointed. It's been remarked that some readers might have been looking for more of a Pirates of the Caribbean experience than a Jane Austen experience, but I thoroughly enjoyed both the Victorian setting and husband-hunting plot.

Secrets at Sea tells the story of the Upstairs Cranstons -- the parents, their awkward older daughter, and their pretty younger daughter -- and their counterparts belowstairs, the Mouse Cranstons, whom, the narrator Helena will remind you, are the older family by generations. The mouse story centers on three sisters: Helena, the oldest who must hold things together;  Louise, the nosey one who gathers all the Upstairs Cranston gossip; and Beatrice, the boy-crazy night-wanderer. They also have a ne'er-do-well brother named Lamont, who loses his tail and must have it sewn back on by Helena, and gets into far too many scrapes involving not only cats, but copperheads. One evening Louise races back to the mouse abode inside the walls with a fantastic tale: The Cranstons are going to sail for England to, as they say, give Olive Her Chance. Meaning they have despaired of marrying their older daughter off unless they take extreme measures. Louise considers the younger daughter "her human," and can't bear the idea of being separated, and after one thing and another the mice decide there's no help for it but to stow away in Camilla's luggage and go to England too. Despite the fact that "Water is not a happy subject with us mice," two older sisters and their mother having drowned in the rain barrel some time before.
Many shipboard adventures ensue, especially after the Cranston mice discover that the ship has just as many rodent passengers as human. There's a one-eyed cat, a five-year-old lord who won't lay off the sweets, and mouse royalty capped off by Her Royal Highness, the Duchess of Cheddar Gorge. A delightful, dead-on 1880s voice and plenty of humor add to the fun. And yes, there's enough of both human and rodent romance to go around, all with the utmost of Victorian propriety.
What's interesting is that, though this is a historical novel (I heard Richard Peck speak several years ago and he stated he'd be writing historical for the rest of his career), it appeals to the princess phenomenon that is very today. I love the implication that there is an entire hidden mouse world analogous to the human one; the life we see is not the only life there is. Children who have felt the burden of being the oldest will also relate to these appealing, well-developed characters.
A few minor glitches (the occasional line of telling that diluted the showing, the occasional question of POV) are just that -- minor. Definitely recommended!
Posted by Marcia at 6:00 AM 18 comments: