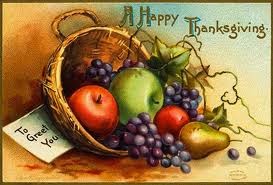 May your lives be fruitful and your baskets overflow. Happy Thanksgiving, all.
Posted by Marcia at 6:00 AM 2 comments:

I had the pleasure and privilege of being on the panel with these lovely ladies just this past Saturday, November 15. Here we are: 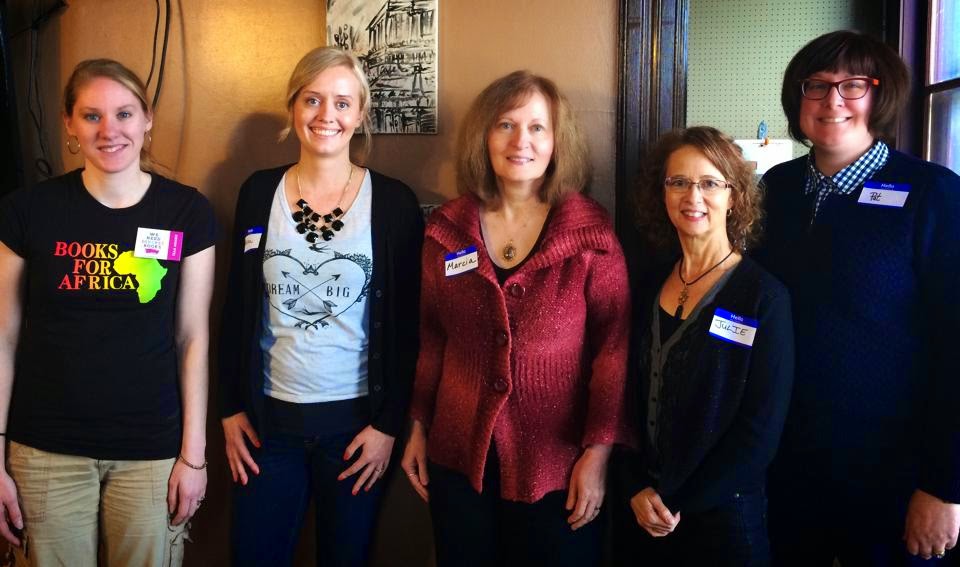 Oops! Looks like I colored outside the lines a little there. But this way you can see us better.

We met in a lovely old building with lots of dark wood that houses Harmony Cafe in Appleton, WI. And the event was just what it sounds like: Attendees asked questions about working with agents and editors, and we shared our experiences. Researching, querying, revising, publicizing, deciding when a book is ready to query, when you should or shouldn't do an R&R (revise and resubmit), subsidiary rights -- all these and more were covered. Lunch was included, during which there was plenty of friendly chat; it's amazing how talkative a roomful of introverts can actually be. It would have been great to be able to stay longer and share more, which I guess is very much a sign of a successful event. A good time was had by all!
Posted by Marcia at 6:00 AM 11 comments:

Guest Post by Bish Denham, Author of A Lizard's Tail 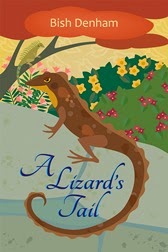 Today, let's welcome Bish Denham and let her tell us about her newest release, A Lizard's Tail. If you're like me, you love the look in that lizard's eye! And here's Bish, to tell us all about him.


It’s All in the Name

Thanks for letting me visit your blog, Marcia!

People ask me where I get my ideas and how long it’s taken to get something written. Well, A Lizard’s Tail has been simmering for a long time.

It began around 1977 in the Virgin Islands while I was working for a friend who had a ceramics shop. She made souvenir ceramic mugs and other touristy things, for wholesale. I helped with pouring slip, cleaning, and glazing. One slow days we’d sit around playing with clay, making small sculptures, beads, or hand-molding bowls.

One day I “sculpted” a lizard. When it was dry, I glazed it and fired it. It came out looking quite mischievous and obviously needing a name. Another employee, who helped pack and deliver orders to the various stores, was a nice, humorous guy name Marvin.

He saw the lizard and liked it so much I decided to name it after him, to which he replied that Marvin needed a last name. Right then a wind chime tinkled. From out of the blue his full name came to me. Marvin P. Tinkleberry. What the “P” stood for I had no idea, but we all agreed the name suited my little lizard sculpture quite well.

I knew immediately that I had a character for a story.

Early notes indicate that I was thinking of making him a kind of story teller that explained things like, why hibiscuses are red or why lizards do push-ups. But none of those ideas felt right.

And so Marvin slumbered. Later notes talk about him being vain and full of himself. I was getting closer. Then, about ten years ago, the actually idea for a story came to me. Marvin had to have conflict, what greater conflict could he have than dealing with a dangerous feral cat?

Thus, A Lizard’s Tale began to take shape. I wrote the first rough draft in short order. It was the revising and rewriting that took a long time. I did it in bits and pieces, in fits and starts, because for me, revising is the hard, boring part, though I’m getting better at it.

After I self-published Anansi and Company, I was determined to put Marvin out there too. And now, here he is in all his glory, a vain, young lizard who believes he has a destiny.

What, you may ask, does the “P” stand for? Well, you’ll have to read the story to find out.

Do you have ideas that have simmered for years before taking shape? Do you enjoy revising or is it a part of the job you don’t like?

Bish Denham was raised in the U. S. Virgin Islands. Her mother's side of the family has lived in the Caribbean for over one hundred years and she still has plenty of family there whom she visits regularly. She says, "Growing up in the islands was like living inside a history book. Columbus named the islands, Sir Francis Drake sailed through the area, and Alexander Hamilton was raised on St. Croix. Then there were the pirates who plied the waters. Life for me was magical, and through my writing I hope to pass on some of that magic."

Bish has known many lizards in her life. Marvin and Leeza are based on two that lived in her bedroom. She is the author of Anansi and Company: Retold Jamaican Folk Tales which you can find on Amazon.com.
Posted by Marcia at 6:00 AM 16 comments: