The Dogs of Winter, by Bobbie Pyron 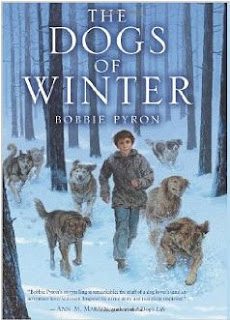 When Bobbie Pyron's MG contemporary, A Dog's Way Home came out (well, sometime after it came out, to be precise), I talked about it here. Two weeks later, I had the great opportunity to interview Bobbie, here. This is Bobbie's latest MG novel, again about kids and dogs, The Dogs of Winter.

This book is fascinating on so many levels. First, it's based on a true story. It's not just that a five-year-old boy surviving Moscow winters (more than one of them) alone with a pack of dogs is riveting in itself. It's that, following the fall of the Soviet Union in the early 1990s, thousands of children were in this boy's shoes. Government support was suddenly gone, and children ranging in age from toddlers to teens lived on the streets, stealing, begging, smoking, drinking, forming gangs and worse, all in an often futile effort to survive and/or avoid what they saw as incarceration in orphanages. The book is also fascinating because of the effect of the dogs. Though this book cannot be called light, or even humorous in any way, the dogs definitely lift some of the bleakness.

Five-year-old Ivan, who remembers being called the pet name "Mishka" by his mother, is desperate to avoid capture, because he is sure his mother is looking for him and will not find him in such a place. Innocent and even naïve at first, he slowly realizes that his mother is not going to return, and worse, that that bloodstain he'd found in the apartment they'd shared with an abusive man likely means she is no longer alive. Tired of being battered, taunted, and forced to beg and turn over the money to an older child, one night he sleeps under a bench in the subway over a heat vent. He awakens and finds a dog next to him. Ivan quickly learns that the dogs share food with each other, unlike the people. When he hides some of the money he gets from begging and buys food for the pack of dogs, he not only earns their friendship, but they welcome him into the pack.

They live in dens, ride trains, forage for food, and in general use their wits and their bond to stay alive, one day at a time. While always remaining in Ivan's POV, we also come to realize that through the eyes of other people he is turning into a "dog boy." He communicates as the dogs do, in growls and barks, though he has not forgotten language entirely. As much as we root for Ivan, we know that a boy cannot continue to live with dogs. We also realize that if he had, we wouldn't know his story. I don't think it's that much of a spoiler if I give away that, yes, he doesn't stay with the dogs permanently.

If you need an example of a MG novel in which the MC is much younger than the readership age, this is one. While at times I think Ivan is unbelievably mature for five, this is in part countered by the fact that he's narrating the story at an older (though indefinite) age. And, of course, by the fact that this is, in its basic aspects, a true story.

NOT just for dog-lovers, The Dogs of Winter is recommended for readers MG and older who will not be overly sensitive to or disturbed by the harsh conditions.
Posted by Marcia at 6:00 AM 16 comments:

At least, when they're not sprawled across the keyboard. 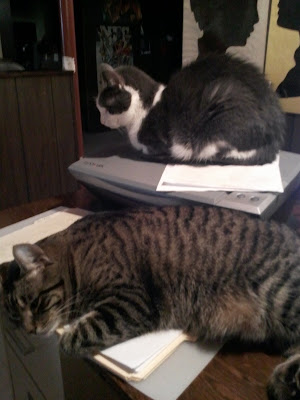 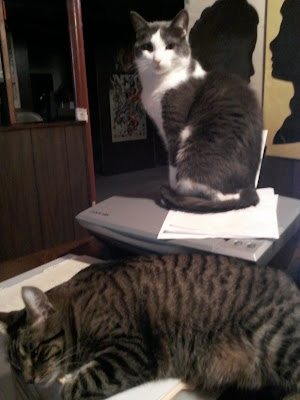 Email ThisBlogThis!Share to TwitterShare to FacebookShare to Pinterest
Labels: Fun stuff, The State of the Office 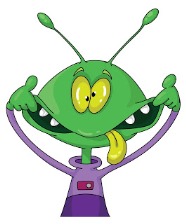 So who is this little green guy? Well, I have it on good authority that this is Ace Hansen, and Ace has a funny MG novel out from MuseItUp Publishing called Julius Caesar Brown and the Green Gas Mystery! Yes, as you may surmise, Ace does have an alter-ego, and she is Angelina Hansen of the blog yascribe.

MH: First of all, Angelina (or should I say Ace?:)) congratulations on the release of your book. Humorous MG mystery written by an alien is quite different from your literary historical YA that I've had the pleasure of reading. Is this a new direction for you, or do you naturally have a wide range?
AH: I'm a neophiliac, which means I'm addicted to change, which means every project is completely unlike the last.

MH: So you DO have a wide range. Awesome! Do you view your MG writing as quite different from your YA writing, in general? How do you see Angelina's work vs. Ace's work?

AH: Most wouldn't believe the same person wrote both my YA and MG. That's why I use a pseudonym for the MG. Angelina's work is serious, bent toward the literary. Ace's work is outrageously funny.

MH: What was your inspiration for this story?

MH: LOL! A story's initial spark can be such a surprise, can't it? All it has to do is get our "what if?" thoughts working and we can go off in any direction! Is the book based on your childhood memories of being surrounded by boys? Did you set out to write a boy-friendly book?

AH:  Not really, but being surrounded by boys sure did give me a wacky sense of humor. I wrote this book for fun. Along the way, I discovered there's an 11-year-old boy inside of me.

MH: How long did the book take you to write? Was there a difference in this from your more literary (and more researched) work?

AH: This book was the fastest I ever wrote. Three months to draft it and there wasn't a whole lot of major revision to do.

MH: I'd love to know how JCB got his name. What significance does his name have? What impact on him?

AH: I'll let Julius explain it in his own words, taken as an excerpt from the first chapter:

Parents should think before naming their kids.

Before I was born, my parents got married and spent their honeymoon in this Italian city called Rome. Mom loved the story of how she stood in that giant stadium, the Coliseum, and decided if she ever had sons, she'd name them after those dead Roman ruler dudes, the Caesars. A year later, her first little Caesar arrived. Me. Julius Caesar Brown.

I stuffed my test into my backpack and waited for the bell to ring, cursing my mother. Why couldn't she have just named me John or David or Mike?

MH: I've always thought parents should think before naming their kids, so he's got my sympathy. :) Ace/Angelina, where can readers get Julius Caesar Brown and the Green Gas Mystery?

AH: From the publisher, MuseItUp Publishing. The ebook is available as of July 12, 2013. The print book will be available before December 2013. It is also available on amazon.

Congratulations again, Angelina/Ace, and I'm sure MGers looking for uproarious, kid-friendly stories will thank you!
Posted by Marcia at 6:00 AM 17 comments:

Start Your Novel, by Darcy Pattison 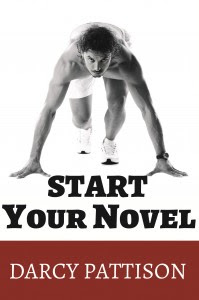 Start Your Novel is the newest writing book by author, teacher, mentor, and speaker Darcy Pattison. If we've been writing for very long, or querying or submitting our work, we've learned the importance of a novel's beginning. When we send sample material, what does the agent or editor want to see? The beginning. Apply for an SCBWI grant and what must you send? The beginning. Include  pages for critique along with a conference or workshop registration, and what do they want? The beginning. Enter a contest, and what do they ask for? The very beginning! And what does a potential book buyer skim before deciding whether or not to plunk their money down? Yup...the beginning. It's no wonder that the beginning of your book can make or break your chances of getting the kind of attention that can lead to agent rep or a book contract. An entire book that guides you through planning, writing, and revising your beginning is a big help indeed.

Darcy Pattison divides her subject matter into six steps:
Even if you've already sat down and written your first chapter by the seat of your pants, Pattison's steps can help you revise it, and revise it again, until it's just right.

I think the material on backstory and flashbacks is especially valuable. My favorite quote from the book is this: "You put the backstory at the point where it impacts the emotional weight of the story." That is right on! The author presents practical techniques for writing flashbacks, but just as important is the discussion of the wheres and whys of flashbacks. She says, "Why include this flashback? It must up the stakes, provide motivation, increase the emotional tension; it must relate to the current novel in a vital way. If it doesn't do this, if it's just there to give us a history lesson, cut it."

I also appreciate that the author says a word about trying too hard to grab readers with your opening. Frankly, first lines that try too hard to be weird or bizarre or over the top jerk me out of the story before I'm even in it. She covers so much more, too, such as providing context in your opening (where are we? How are we, emotionally?), types of openings such as "the moment before" and the prophetic opening, using a mentor text, classic patterns for opening sentences, and assignments that can help you get unstuck. Whether you already have a draft of your novel's beginning or not, for guidance as you zero in on honing that beginning, try this helpful book.
Posted by Marcia at 6:00 AM 19 comments:

Happy, but Possibly Not a Camper?

I have no little sticker to show you today, because I did not "officially" win Camp NaNo, mostly because I'm not one to post my stuff there for word-count verification. But I got a lot done, including 3,000+ words on a new project plus revisions for my agent. In the midst of a month that has been somewhat crazy, included more-than-usual family time (which is good), and thrown a surprise or two my way, I count that a success.

I joined Camp NaNo because a friend wanted someone to do it with. You go to camp with your friends, right? Really, though? I think we could have just had our own month-long slumber party. Our camp participation consisted of doing our own writing and messaging each other, on pretty much a daily basis at first. As the month went on, going faster and getting hairier for both of us for various reasons, we wrote each other at more length but a little less often. Finally, we just switched our correspondence out of the Camp NaNo site and over to our regular email. Really, the letter-writing and getting to know my friend better was the best thing about a "camp" experience, and I'd do it all over again for that aspect.

In general, I am not a speed-writer, and I'm one who revises as I go, which makes NaNo in its various forms not ideal for me. But setting goals with partners can help you be more productive than you'd otherwise be. Next time, though, I suspect we won't "join" anything official. We'll probably just make our own unofficial writers' retreat by ourselves.

How about you? How's your writing going? Do you do writing retreats in any form?
Posted by Marcia at 6:00 AM 25 comments: