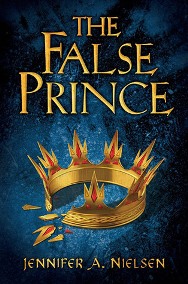 And while I was not completely, completely surprised by a certain development, and while I thought a certain aspect was maybe a hair too coincidental (I really don't want to issue any spoilers here), the conceals and reveals are still beautifully done. Upper MG; highly recommended.
Posted by Marcia at 6:00 AM 15 comments:

Boundaries for Writers, by Kristi Holl 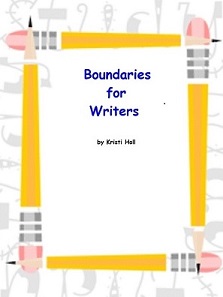 "My time just gets away on me. Not sure where it goes."
"I'm running VBS again this year, trying to get the garden in, then we're going to the cottage for two weeks..."
"My husband doesn't support me, because there's no money in it."
"My kids get in trouble while I'm trying to write."
"My BFF's life is one drama after another and she calls me every day."
"Promotion is brutal, doesn't suit my personality, and I'm scared to death my book won't sell. My love of writing is down the drain."
"I'm a Christian but not writing for the CBA, so my church friends are asking, 'Why aren't you writing for Jesus?'"

Kristi talks about four kinds of boundaries: physical, mental, emotional, and spiritual. Physical boundaries may include such things as a desk of your own or a closed door. Mental boundaries allow you to own your own thoughts. Not that you have a closed mind, but you aren't a mental chameleon, constantly adopting the thoughts of whoever spoke to you last. Emotional boundaries prevent you from being a dumping ground for everybody else's woes. Spiritual boundaries keep you from caving in to others' opinions of how you should serve God, so that you fit their expectations or "look spiritual enough."

Not only are there four kinds of boundaries, but any of them can be in any one of four conditions: healthy, damaged, collapsed, or walled. Whew! No wonder we feel so tied in knots at times. Kristi provides a quiz so that you can assess the state of your boundary issues. (Disclosure: I did pretty well here, but there were a couple of points in the Emotional and Spiritual categories that made me cringe.) She also talks about how to separate and balance the business and creative aspects of writing.  Not shrinking from the tougher stuff, she covers setting boundaries with truly toxic family members, and, for those who have concerns about whether setting boundaries is even scriptural, she includes a chapter with many relevant scriptures and other helps.

If you're struggling with your writing in any way, there's a huge chance that boundaries are an issue, and that there's something in this book that can start you on your way to a solution. :)
Posted by Marcia at 6:00 AM 20 comments: 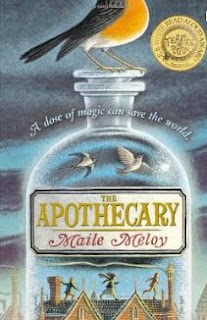 Though I usually focus on MG, I do tout the occasional YA title. I suppose this book straddles the line. Though the cover images may suggest MG, the book felt more YA to me as I read.
It's 1952, and fourteen-year-old Janie's parents are Hollywood screen writers accused of being sympathetic to communism. That's why the family moves suddenly to England, where the parents get jobs writing for the BBC, and Janie must, of course, go to a new school. As in many places at this time, when the signal is given, the kids and teachers must stop whatever they're doing and "duck and cover" -- hide under the desks and tables with their faces buried in their arms. The first time this happens, Janie can't help but notice Benjamin Burrows, the boy who will not duck and cover. It's stupid, he scoffs. Hiding under a piece of furniture will not save you from an atomic bomb.
Benjamin, the son of the local apothecary (pharmacist), wants to be a spy, even though his father wants him to go into the family business. Benjamin can't see pursuing a life of handing out headache pills and croup remedies. But as he and Janie do their own spying, they quickly find out that the apothecary is more than he appears, real spies are everywhere, amazing scientific discoveries are about to be lauched, and that entire nations and even magic are involved in the effort to keep the bomb out of Russian hands. It was very interesting to read this book almost immediately after I read the Newbery Honor book Bomb. I really feel as if I understand the background of the Cold War much better now, having read both.
This book is filled with likable characters, suspense, an intriguing blend of reality and magic, and believable, inventive ways of "getting the parents out of the way." There is a lot here; too much to list, expertly woven into a whole.
Recommended for those who like a "big, magical adventure" and a not-overdone historical period. In fact -- why not recommend they read Bomb, too? Each book sheds light on the other, and together, they illuminate an important time in 20th-century history.
Posted by Marcia at 6:00 AM 13 comments:

A Fun Day at SCBWI-WI NE

Our "Saturday in May" workshop has become an annual event. This year we had TWO workshops on Saturday, May 4. Picture book writer Linda Skeers spoke in the morning about how to incorporate humor into a manuscript. That's a question we all want to know the answer to, as humor can be tricky! I had the privilege of presenting my Idea Explosion Workshop again, in an expanded version, during the afternoon session. 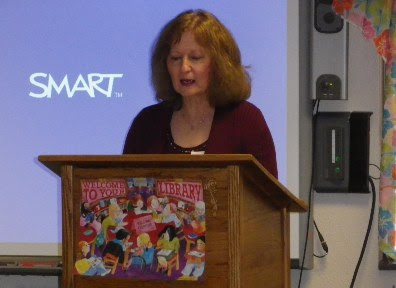 We had 23 attendees, a fantastic welcome from the Muehl Public Library in Seymour, WI, a perfect-sized meeting room, a scrumptious snack table, and wonderful planning by our NE WI Area Rep, Miranda Paul. 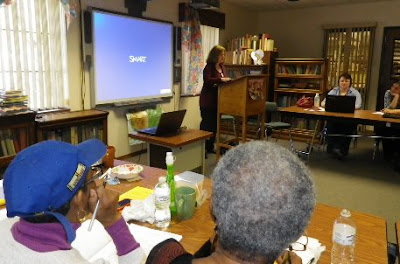 Yes, I did actually use the Power Point. Just not quite yet. :)

It was a great day to connect with friends new and old, and I'm happy to say that both workshops received rave reviews. A good time was had by all!

Have you attended a conference or workshop lately? Gotten together with other writers? Come away with any tips?
Posted by Marcia at 6:00 AM 20 comments: 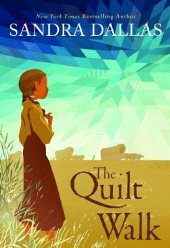 Emmy Blue Hatchett, age ten, lives with her parents and a close aunt and uncle in Illinois in 1863. Little does she know that everything is about to change when her father and uncle announce that they're all setting out for Golden, Colorado. The men want their families to live in the clean mountain air; even more, they want to build a business block that will include stores, hotels, and restaurants to serve the population that has begun to boom following the gold rush.
On the face of it, The Quilt Walk is a good adventure story: friends, enemies, turn-backs, rattlesnakes, and death in a Conestoga wagon train. But as I read I was most keenly aware that the book is a study of male/female relationships, primarily in marriage, despite the fact that we are always in the child Emmy's POV. In many ways Ma is a typical feminine woman of her day: she quilts, as she does all needlework, with only the tiniest, straightest stitches; and if anyone dares question her husband she responds with a firm "Thomas knows best." Still, she voices to Thomas plainly, if calmly, that he did not consult her before making this decision, and that leaving her extended family, her sewing circle, and the graves of their deceased children will be a struggle for her that he does not appreciate. And when there is just not room in the wagon for everything they would like to bring, to the point where Thomas says they can't bring extra clothes, Ma and Emmy solve the problem by wearing every dress they own, and not taking them off until Thomas, later in the journey, is the one to back down. Aunt Catherine, by contrast, so hates the idea of going to Colorado that she almost refuses to leave home, but after a few days on the trail she accepts it, seems to purposely change her attitude, and becomes a helpful and even positive person, free of resentment. That there's a line not to be crossed in submission to a husband, and that the husband, for his part, is required to be a good man, is portrayed by another couple in the train, a new young bride whom the adult women, and eventually Emmy, realize is being physically abused, and her lazy, boorish husband, who hasn't the respect of a single man in the party. Yet another picture of what marriage meant for a woman in those days comes through a happy, vivacious lady and the wonderful husband who adores her -- until a single gunshot makes her the widowed mother of orphaned children, alone with a few oxen and a covered wagon.
Where Emmy's own feminity seems different from the typical is in her hatred of needlework. But walking alongside a covered wagon day after day can be incredibly boring, and tough going, and even Emmy is eventually encouraged to turn to the gift her grandmother gave her when they left: quilt squares from which to stitch her own quilt -- even while walking, as so many of the women did. And though I'm going to refrain from spoilers here, I will say that the progress of the various women's lives continues, showing the range of likely experiences for that day -- with a few surprises, and, in every case, hope.
This novel is based on a true story, and one of the quilts that the family brought to Colorado is now in the Rocky Mountain Quilt Museum in Golden.
Great for lovers of historical fiction and strong girl stories.
Posted by Marcia at 6:00 AM 16 comments: