Random.org says the winners of the January critique giveaway are:  MaDonna Maurer and Terry Lynn Johnson!

Here's the procedure. Email me at marcia at marciahoehne dot com:
Congratulations to MaDonna and Terry Lynn, and thank you all so much for stopping by and entering. Wishing you all a great day in the world of books...
Posted by Marcia at 12:00 PM 9 comments:

I think it's bad to talk about one's present work, for it spoils something at the root of the creative act. It discharges the tension. -- Norman Mailer

Don't tell me the moon is shining, show me the glint of light on broken glass. -- Anton Chekov

How vain it is to sit down to write when you have not stood up to live. -- Henry David Thoreau

Plumbers don't get plumber's block, and doctors don't get doctor's block; why should writers be the only profession that gives a special name to the difficulty of working, and then expects sympathy for it? -- Philip Pullman

Most people do not believe in anything very much and our greatest poetry is given to us by those who do. -- Cyril Connolly

Fill your paper with the breathings of your heart. -- William Wordsworth

I don't know much about creative writing programs. But they're not telling the truth if they don't teach, one, that writing is hard work, and, two, that you have to give up a great deal of life, your personal life, to be a writer. -- Doris Lessing

You can never get a cup of tea large enough or a book long enough to suit me. -- CS Lewis

...reading is the creative center of a writer's life...you cannot hope to sweep someone else away by the force of your writing until it has been done to you. -- Stephen King

Do any of these speak to you? Have you run across any good quotes lately?
Posted by Marcia at 6:00 AM 6 comments:

It's critique time. Enter to win!
Let the entering begin!
Posted by Marcia at 6:00 AM 28 comments:

Cause, Effect, and Process

I recently read about a writer who started her novel in January 2011, was querying agents for that same novel by September, and signed with someone in November. Wow, I thought. That is fast. It made me think about my process. Which is s-l-o-w, and also doesn't include much in the way of advance plotting. Oh, I may have Point A and Point B, but the specifics of getting from one to another are sketchy at best.

Why is this? What is it about my approach to writing a story that determines I will feel my way along at snail-speed? I believe it's this: concentration on cause and effect.

Every step of the way, I want my character to do next that which is believable for this person in these circumstances. That means staying deeply in character at all times, and staying aware of all the little mental and emotional changes and increments that drive her to say this, or do that. It means I let the character build the plot as I go, and most of what happens is a surprise to me. Not a surprise at the moment it happens -- because cause and effect has led up to it -- but a surprise in that I couldn't have predicted it before I started the book. Now, I'm not saying that writers who write fast aren't paying attention to cause and effect. I'm just saying that this concentration results in pretty slow writing for me. Writing with cause and effect as a foundation also prompts me to revise as I go, because cause and effect will lead me astray if a link in the chain is faulty. Revising while drafting is another recipe for slow writing, although I have the advantage that by the time I finish a first draft, it's the equivalent of about eight.

Concentrating on cause and effect improves storytelling by keeping readers continously in the character's emotions. If Nelly picks up her doll, screams "I'm going home," and stomps out of the tea party, but we don't know already know why -- in other words, if the effect precedes the cause -- it means we were at least momentarily detached from Nelly's POV, and we feel more distant from her than we should. That can be enough to disengage readers from the story.

Example: Nelly picked up her doll, screamed, "I'm going home!" and stomped out of the tea party. If Mabel was going to keep wiping her nose on her sleeve, Nelly wasn't going to play with her anymore.

Better: Mabel lifted her arm and wiped a long stripe of snot down her sleeve. Nelly's stomach lurched. She picked up her doll, screamed, "I'm going home!" and stomped out of the tea party.

The second version keeps cause and effect in their proper order. We're never asking ourselves why Nelly stomped out, because we experience the cause of that action right along with Nelly. Cause and effect, I've found, doesn't only improve storytelling. It improves the prose itself.

Concentrating on cause and effect is just plain interesting, too. You never know where you might end up. Or where thinking about a writer who started a book in January and signed with her agent only ten months later can lead. :)
Posted by Marcia at 6:00 AM 21 comments: 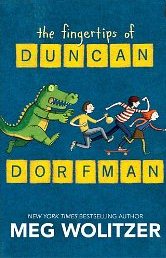 When these three meet at the tournament, they become friends. Wolitzer does an outstanding job of using the game of Scrabble to show the characters' lives intersecting and their views of themselves changing. There are plenty of layers, surprises, suspense (we know one, and only one of the three and his or her partner will win), humor, and moral choices here; likable characters; and a well-paced, intriguing plot. The POV is split among the three kids, but we also get snatches of adult POVs plus omniscient narration. This book contains delights much too numerous to mention--evangelical characters who aren't teased, for one--and a good overview of Scrabble in a way that's fully integrated with the story and not at all boring. Definitely recommended!
Posted by Marcia at 6:00 AM 25 comments: