Random.org says the winners of this month's critique giveaway are: morgan and PatEsden!

Here's the procedure. Email me at marcia at marciahoehne dot com:
Congratulations to Morgan and Pat, thank you all so much for stopping by and entering, and by all means enter again next month! Wishing you all a great day in the world of books...
Posted by Marcia at 12:00 PM 3 comments:

May Book Pick -- Okay for Now, by Gary D. Schmidt. 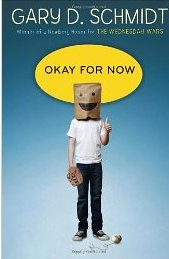 Read this! It's fantastic!

I almost don't know how to start talking about this book, but I'll try. Newbery buzz there is, and plenty, and if anything else comes out in 2011 that's going to top this book -- well, then it'll be an amazing year.

If you've read The Wednesday Wars, you'll remember the protagonist of that book, Holling Hoodhood. (With a name like that, how could you forget him?) Holling makes a cameo appearance in this book, just as Doug Swieteck, the main character in Okay for Now, does in WW.

Doug's life in 1968-69 is darker than Holling's. After his belligerent, abusive father loses yet another job, his family moves to a small town in New York and rents a house Doug calls The Dump. Doug's mom is loving but powerless, his older brother a bully, and his eldest brother, also a bully, gone to Vietnam. It doesn't take you long to realize that the boys are becoming like the father. Your heart goes out to them, but you feel like the mother: powerless to stop it. And yet, by this book's end, almost all of it stops, and you believe it. This is a book is about redemption.

There are plenty of villains: a librarian, Principal Peattie (who refers to himself in third person so that you'd like to sock him), Dad's best friend, Doug's gym teacher. Yet, almost without exception, you get glimpses into what each of them is going through, and, slowly, Doug comes to an understanding with them. There are also lots of people who aren't villains: a few of the guys at school; a teacher or two; a special girl; Mr. Powell, the other librarian, who teaches Doug to draw; Mr. Ballard, Dad's new boss, who understands everything better than Doug realizes; and more. Almost too many to believe, yet we want to believe it, and love them all.

And there are so many plot threads, involving John James Audobon and his Birds of America book of drawings, the eldest brother's anticipated return from Vietnam, Doug's relationship with the girl Lil, a series of burglaries for which Doug's middle brother is blamed--and, by association, Doug. Other issues include illiteracy, serious illness, baseball, and Broadway. Yes, this is a BIG book (though only 360 pages). And it's a book that flirts with trouble when it draws so heavily on something like Audobon and his bird portraits (oh, and did I mention Jane Eyre, too?) in a book for a MG audience. There may be a couple of points where one could quibble about plausibility, but overall, the ambition, the emotional impact, the voice -- it all works. That alone makes this book great.

It's not an easy book. Parts of it are excruciating, while not beyond a MG audience. In Doug's world, there are decent and not-so-decent people, and we learn that if we look into the not-so-decent, they have reasons for the way they are. Hurt people hurt people, as the saying goes. Yet they can have redemption if only they will.

It's critique time. Enter to win! Here are the rules and caveats:
So if the above sounds good to you, let the entering begin!
Posted by Marcia at 6:00 AM 18 comments:

I thought it might be a good day for a quote collection. Here's what a couple of writers have to say--about (mostly) writing, naturally.

Richard Peck:
John Gardner:
What do you think? Agree? Disagree?
Posted by Marcia at 6:00 AM 11 comments:

Compassion and the Writer

It was something I sensed when I first started writing at age eight or nine, but wasn't sure how to put into words. Something I knew when I read Nancy Drew, The Happy Hollisters, Mrs. Piggle-Wiggle, Anne of Green Gables, Caddie Woodlawn, Little Women, and on and on. Something I got cranky about as a teenager, going on inner rants like: "How can these people [my classmates] raise their hands and tell an English teacher all about the motives and feelings of characters in books, and not understand or care a thing about kids right next to them?" When I began to take writing seriously, I studied the aspects of craft -- character, plotting, POV, structure, setting, dialogue, revision, how to cut, how to market. But what writing program teaches you to grow the compassion you need to understand many types of people, the compassion you need to be a really good, even great, writer?

We have to be able to imagine where our characters are coming from and what they're going through. How they think and what they feel. Instead of just dismissing someone as snotty, dim-witted, wacko, evil, or whatever, we have to understand who they are on the inside and why they appear as they do on the outside. We need to develop compassion, which is to say that to be good fiction writers we have to become better people. Think of it : better people writing better fiction in better service to readers. Give me plot, absolutely. But please, please, give me compassion for characters. Walk in their shoes. Sit in their chairs. Don't just entertain me, but encourage me that there are compassionate people in the world like you who love and know their creations deeply. And I won't soon forget the world you've created.

Brenda Ueland, in If You Want to Write, speaks of the Third Dimension in writing, which is the writer's character. "It will shine through the writing," she says, "and make it noble or great, or touching or cold or niggardly or supercilious or whatever the writer is." And she adds, "I have come to think that the only way to become a better writer is to become a better person....now we are apt to say of a man, 'Oh, you must not pay any attention to his personality; it is his ideas that are the important thing.' But I think -- and so did Socrates and Michelangelo and many others -- that the ideas of a meager and dishonest personality are no good."
Posted by Marcia at 6:00 AM 19 comments:

Random.org says the winners of this month's critique giveaway are: Christine Sarmel and Amy C!
Here's the procedure. Email me at marcia at marciahoehne dot com:
Congratulations to Christine and Amy, thank you all so much for stopping by and entering, and by all means enter again next month! Wishing you all a great day in the world of books...
Posted by Marcia at 12:00 PM 5 comments: