The 14 Fibs of Gregory K, by Greg Pincus 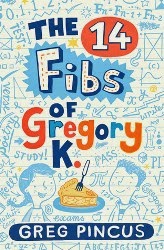 This is a realistic MG novel about math and writing. How could I not read it?

Gregory is a middle child. Not only that, he's the middle child math-hater in a family of math lovers. Really, math eaters, breathers, and sleepers, if you're looking at Gregory's father and his older brother Owen, who both won the famed "City Math" competition in their day, and who spend almost all of their time in an attic study devoted completely to math. Mom, whose feet are a bit more on terra firma, is an accountant. (Not the same thing, but to anybody who hates math, it probably is.) Kay, Gregory's younger sister, is just wicked smart, period.

Gregory loves to write, which he has not dared breathe a word of to anyone except his best friend, Kelly, who shares that love and who wants him to go to Author Camp with her in the summer. Especially since Kelly and her mom are moving away after the school year ends in a few short weeks and they won't see each other much anymore. Gregory promises they will go. Except he hasn't asked his parents, and he can't do that because they'll say no due to his current failing math score. In fact, his parents are going to make him go to Math is Magic Camp if he can't get his grade up. Continuing to fib to his parents about his love for math, because he can't bear to baldly state that he doesn't fit into his family, he recklessly declares that he's going to enter City Math himself.

In short, the key to Gregory's getting through all this is that he makes up a form of poetry he calls "Fibs." The poems contain 6 lines, a total of 20 syllables, and each line has a number of syllables equal to the first six Fibonacci Numbers: 1, 1, 2, 3, 5, 8. (In the Fibonacci Sequence, each number is equal to the sum of the previous two.) The Fibs begin each chapter and are sprinkled throughout, besides, and are delightful.

Gregory's math teacher is a really good character, and Gregory does have to work for his grade. However, I have this underlying feeling that, despite the great things that happen in the personal study program they devise, Gregory is really leaving 6th grade not knowing what he needs to know. And I'm not sure his teacher, in real life, wouldn't have to face some backlash. Kay, the younger sister, has some wildly precocious dialogue that I had to take with a grain of salt, and I found it odd that the reason for Kelly's move, when her mom already owns a thriving dessert restaurant right here, isn't explained.

But I loved the emphasis on math that won't bog a non-math reader down, the true kid appeal (these are genuine MG problems and stakes), and I loved this: Studies have shown that boys fall into one of four categories -- they're good at math, writing, both, or neither. Girls, however, fall into three categories -- they're good at writing, both, or neither. What this means is that if a girl is good at math, she's good at language, too. When I first read this research, I thought back through years and years of experience in math classes, and realized my experience fit the statement. Girls who had math talent also had language talent. Gregory is good at language/writing and not math. Kelly is good at both. Kay is good at both. Had the girls been good at math only, I wouldn't have been convinced by them. But for me, all three kids passed the test. :)
Posted by Marcia at 6:00 AM 15 comments:

Grammar Girl says she regularly gets questions about the differences between till, until, and 'til, and how to use them.

'Til is apparently in the process of becoming accepted (shudder), but it is a totally unnecessary word. I think I know what happened: somewhere along the line people began to assume that "till" (as they heard it pronounced, not necessarily as they spelled it) was an abbreviation for "until," and they couldn't figure out why you wouldn't spell that as 'til. But till and until are actually separate words that are synonymous. Yes, till is a noun meaning cash register and a verb meaning to work the ground (lesser known, it's also a noun meaning a glacial drift or a stiff clay), but its #1 function and definition in my dictionary is as a preposition meaning "up to the time of; before; until." Of the two words, till is actually older. Until came later. 'Til came, well, way, way later, and, I believe, under mistaken circumstances. We don't need it. We already have the one-syllable form till, which is not an abbreviation.

The Associated Press Stylebook recommends till or until, but not 'til. Bryan A. Garner, of LawProse calls 'til a "little virus," and his quotes of several other usage guides includes this: "'Til is a variant spelling used by those who think (incorrectly) that till is a clipped form."

I'm pretty open to changes in the English language. I'll go pretty far with verbing nouns, and I think "they" and "them" will become standard singular pronouns for a person of unknown gender within my lifetime. But 'til -- nah. It's going to be a long time till I can go there.
Posted by Marcia at 6:00 AM 14 comments:

Circa Now, by Amber McRee Turner 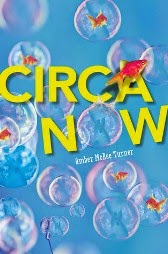 Someday, I'm getting a book cover this blue. Just saying.

Twelve-year-old Circa Monroe lives with her parents in a home whose most important room is Studio Monroe, where Mom runs her portrait photography business out of one half and Dad does his photo restoration work out of the other. Circa has a knack for intricate Photoshopping just as her dad does, and she had learned many techniques from him. But most important of all to Circa is the special file called "Shopt," consisting of just-for-fun Photoshopping weirdness and Dad's fun little stories to go along with the fantastical pictures. In creating this cozy, artsy, family atmosphere, Amber McRee Turner wastes no time at all making me want to live in Studio Monroe right now.

But that, as we know, is the status quo, and the status quo must change. When Dad heads out into a threatening tornado to deliver a restored photo to a particularly unpleasant family's reunion party, the worst happens. The tornado strikes the reunion site, and Dad is killed. Mom, whose depression and possible agoraphobia have been pretty well controlled by meds and the balance provided by Dad's presence, loses some of her functionality. This year, I have read no end of novels that are about dead parents and/or dysfunctional moms. I tossed some aside because it was just so much of the same that I was truly astonished. Not Circa Now. For one thing, the writing and turns of phrase are truly fresh. For another, the author makes me love the characters in the beginning, as "whole" selves, so that I care when they begin to falter. For yet another, the mother doesn't devolve so completely that she and Circa reverse roles. Besides all this, there is the mystery boy who appears at Studio Monroe out of nowhere, calling himself Miles and having lost his memory. And when random items that have been Shopt into photos start appearing or vanishing in real life -- e.g., a bird's nest appears in the tree outside Circa's window when Shopt into a picture, and a blemish falls off her friend's face when Shopt out of a portrait -- Circa has to wonder if maybe the reason they can't find Miles's home, and Miles can't find his memories, is that he doesn't have any -- because he himself was Shopt into existence.

This is one of those books where, even amid sad things happening, you want to be part of the characters' world. Add the good writing, the mystery, the light magical realism aspect, and the interspersed Shopt photos with attached stories (and the whole originality of that), and this book comes out a winner. Highly recommended.
Posted by Marcia at 6:00 AM 16 comments:

Another Book for our Critique Group

My long-time critique group has celebrated a lot of books over the years. Just a week ago we did it again, when Mary (second from right) brought her new book to our group meeting. Mary's Go Round is a self-published collection of all the short stories she has worked on since...well, since we've been a group. The physical book and its design are absolutely gorgeous, and it's filled with all of Mary's shiny, polished stories. With the release of this book, she has crossed a major item off her bucket list.

"I don't know what I'm going to write next," said Mary. "But I'll have to write something. You don't want me to leave you, do you?"

"No," the rest of us said, shaking our heads as one.

"Well, then I'll have to come up with something," she said. "What about family stories?"

So, we'll have to see what Mary has for us next time. Here we are, holding our autographed copies and our bubbly. Congratulations, Mary. 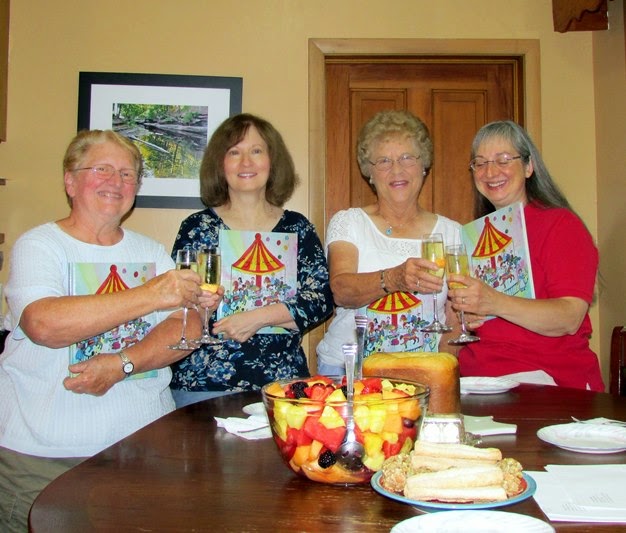