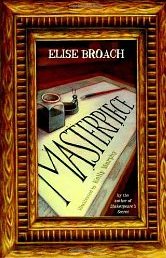 Critique giveaway open through Sunday the 25th! Scroll down one post.

I've been a little cranky about books lately, and while casting about for an absorbing middle-grade novel I was delighted to find Masterpiece by Elise Broach. (An earlier book by her, Shakespeare's Secret, is also excellent.) I do not have much of a nose for trends; I tend to like things the crowd doesn't; but if I had to hazard a guess about "the next big thing" in MG/YA, my guess would be mysteries. They're due, are they not? Both books mentioned here are mysteries with an intellectual bent (the identity of Shakespeare figures in one, and the Metropolitan Museum of Art in the other). And while Shakespeare's Secret is a bit more traditional in that it features all human characters, Masterpiece is about the friendship between James, a boy, and Marvin -- a beetle, and what happens when it turns out the beetle is an art genius but his drawings are attributed to the boy. I guess you could call the genre a cross between mystery and magical realism.

I love books that hook me from the start, and this did. Marvin and his family live in a damp corner of the cupboard under the Pompadays' kitchen sink. His bed is a cottonball, he swims in a bottlecap filled with water, and his family plays a beetle version of horseshoes by tossing staples at a broken toothpick stuck in a crack in the floor. Mrs. Pompaday, a shrill social climber more interested in her new husband and baby than in eleven-year-old James, the son of her first marriage, is humorously rather than seriously awful. James is mostly unnoticed on his birthday until he receives a visit from his dad, a gentle artist whom one can see right away is completely different from Mrs. P. But even Dad disappoints; he gives James a pen and ink set as a gift. James tries it out, gets bored, goes to bed, and the curious Marvin dips his front legs into the ink pooled in the cap, starts drawing, and finds his passion. The next morning, of course, the incredibly good drawing of the scene outside James's window is attributed to James, and what is he supposed to say? That his new beetle friend drew it? The complications grow when, through his dad's connections, James is approached by a museum curator to duplicate a painting by Albrecht Durer in a scheme to foil an art theft.

The book succeeds as a mystery, as a story about friendship and agape transcending even huge differences, and in its exploration of what to do and where to turn when there are things you just cannot possibly tell people. In both Masterpiece and Shakespeare's Secret, author's notes explain what is factual and what is invented, and I did find a few of these distinctions surprising and in one case, mildly disappointing. But I highly recommend both books.
Posted by Marcia at 6:00 AM

Thanks for drawing my attention to these, Marcia. My daughters are always looking for middle grade mysteries.

I love me a good animal story. My daughter too. Thank you for this.

I love finding books that surprise me in a good way and have so much more depth to them than so many of the books out there. I'll let you know if I find one you'd like!

Wow! I am totally fascinated by this. Marvin's miniature world under the sink brings out the middle grader in me.

Never been a huge mystery reader but I do think it would be a great next trend. Refreshing!

Thanks for pointing me to a book I haven't seen anywhere else.

Andrea -- Your daughters are always looking for mysteries... (takes notes :))

Laura -- Thanks, I'm always open to a good recommendation.

Joyce -- It's just so fun and inventive. I was captivated right away. My guess is that any new breed of mysteries will be more character-driven than in the past.

This sounds fascinating. I'm reading more MG since I'm back to teaching middle graders, and I love mysteries.

Have a great weekend.

This sounds really nice, and I have to say, I think you're onto something with mystery being the Next Big Thing. It does seem due for a reboot, doesn't it?

Medeia -- Isn't it great that as a writer/teacher, you get to know a certain age group so well? Have a great week! :)

Ron -- I was always a mystery lover growing up, and I've written a couple. I could really see kids going for more.

Hi! I just found your blog, and it seems we have a lot in common...I loved reading your favorite books list, because so many of them are my favorites, too! (Including Elise Broach's...Her newest book just came out this summer and I can't wait to read it!)