October Book Pick -- The Trouble With May Amelia by Jennifer Holm 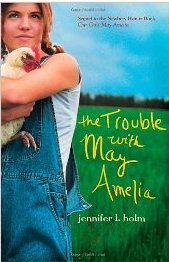 Twelve-year-old May Amelia Jackson is the daughter of Finnish immigrants and lives on a farm in Washington State in 1900. This makes her only two years younger than my paternal grandmother, who told me stories of growing up on a Wisconsin farm during that time. Though the details are different, the tone of the times in the book matches what Grandma told me, so I was primed to enjoy this book and connect with May Amelia, whom I met earlier in Jennifer Holm's Newbery Honor prequel Our Only May Amelia.

My grandmother's family had been in America for a generation or two more than I suspect May Amelia's has, yet the emphasis on the mother country (in May Amelia's case, Finland) rings true.  So does the emphasis on hard, unrelenting farm work. So, I have to add, does the parents' sternness; in that era, that a child might need self-esteem wasn't even on the radar. MA's pappa proclaims, often, that girls are useless. Truth to tell, he has little regard for the passel of brothers that precede her, either, except for the oldest.

Not all of my book discussions contain spoilers, but this one does.

The book has plenty of funny moments, such as when Friendly the bull knocks over the school outhouse when MA is using it. A subplot in which every eligible bachelor for miles around courts the pretty teacher is sweet and amusing. Yet the author paints a clear picture of how hard life was. A baby sister has died. One brother is nearly deaf from an illness, and apparently cannot be helped. A second brother loses a hand working as a logger.  MA shares not only a room but a bed with one of her brothers. All of this is routine, but life changes for MA when a businessman-type visits area farmers selling stock in the development of a new town. Suddenly Pappa finds MA not quite so useless after all. He uses her as his English/Finn translator, and on that basis buys into the project. But the man is a charlatan and fleeces the Jacksons and several of their neighbors, and Pappa flies into a rage and tells MA that losing their farm is all her fault. "You're the one who read the papers! You are the reason we have lost everything. You useless girl!" He even says that she is not his daughter anymore.

This part of the story angered me on MA's behalf. Her mother says nothing. Not one of her brothers intervenes or will even look her in the eye. No one says a word to the effect that Pappa himself was the one hoodwinked by a scam. And I understand that this fits the era and the supremacy of the husband and father. But I still hate that this could happen, and hate it worse because I believe it. What happens next is that Pappa's brother, a kind man who somehow made the decision not to live like his and Pappa's own mean mother, takes MA into his home. And not a single one of her family members even says goodbye when she leaves.

After several months, one of her brothers shows up and tells her she has to come home. The farm is lost, and Pappa and the able-bodied brothers are all working at the logging camp, which now includes room and board, he says, and Mamma's working in a cannery. MA agrees. I didn't want her to go. I wanted her to stay with her uncle and never return. I started thinking about how she, how anyone, could do this while making sure they weren't falling into the trap of unforgiveness and bitterness.  But, really, the bottom line is that MA had to go back. In 1900, you went back. I was pleased that she asked them whether they just needed a cook, and the answer was no: the brother who lost his hand was doing the cooking with a spoon tied to his stump. You're like a flea, is what they tell her. Annoying, but it wouldn't be home without you.

Based on quite a bit of Holm's family history, The Trouble with May Amelia is hard to forget. Definitely recommended.
Posted by Marcia at 6:00 AM

Marcia, this sounds like a great story! Thanks for drawing it to my attention. I'm going to look for this one.

I loved the first book so I'm sure I'll like this one as well. Plus, I'm currently reading a non-fiction account of pioneer women in the plains and prairies. And how you describe the book is very similar to what I'm reading about.

I adored TURTLE IN PARADISE and MG historical fiction is my very favorite type of reading (as well as what I'm writing), so thank you for your complete review. Sounds like a story where a tear or two roll down your cheek as you read also...

I bet my library will get it soon. I love these books you won't forget!

I loved Our Only May Amelia and will be sure to pick this too. As to the ending, I'm thinking many people will hate the ending to my book as well, but it has to be that way ... it speaks the truth.

Andrea -- Yes, it's good. Emotionally involving for sure!

Bish -- I don't know if I'm glad my grandma's life wasn't an isolated incident or not. :) I think I'd enjoy that book you're reading.

Barbara -- I also love historical MG. If a novel is about an emotional experience, this certainly delivers!

Laura -- Yes, I'd expect most libraries to buy this, given it's a sequel to a Newbery honor and given the reputation of Ms. Holm. It's one they SHOULD buy.

Thanks for the review. Sounds like a great one to read. I'll be putting that one on my TBR list.

Thanks for the pointer, Marcia. This book is a definite ‘get.’

I loved/hated this book, too... It was a beautiful story, such a beautiful character, but often so hard to read. I won't forget it, and definitely recommend it...but I'm not going to be reading it again too soon. As my four-year-old would say, "it made my heart hurt."

Yet again you've told us about a book that I want to read. I love historical fiction, especially MG and YA. I'll put this one on my list too.

My family had dozens of stories like this, of girls (and boys too sometimes, though mainly girls) who went to great lengths to help their families, sacrificing their own personal lives and happiness in doing so. It's hard to compare them to today's generation -- or for that matter, even to mine.

Sounds like an interesting book. I had to do a double-take though, because the girl on the cover does not look twelve. Well, at least not to me.

MaDonna and Mirka -- I think you'll be pleased. :)

Mary -- That's so true about kids who sacrificed. The grandma I mentioned lost her mother at 13, and became "the woman of the farm" and raised her 5 siblings.

I love stories set at the turn of that century and they remind me of a lot of stories my grandmother told me as well.

Sounds like a super read, Marcia. I love it when I can relate on a personal level with a book.

I adored the first May Amelia!

Wow - that sounds like a fascinating book! Thanks for a great review!

Lee -- I think I look for the parallels when reading books set in that time, too. It helps me relive times with Grandma. :)

Sharon -- I too enjoy moments in a book that I know are authentic. Helps me realize how important it is to get details right for readers.

Caroline -- I did, too, but my memory of it had faded somewhat. Not sure I'll forget THIS one.

Susan -- Anyone interested in historical should definitely give it a look!